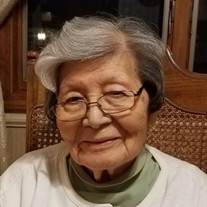 Princeton, IL – Kay K. Scherer 92, of Princeton passed away peacefully at Heritage Health in Chillicothe on Monday, April 13, 2020 with her daughter and son-in-law by her side. Kay was born on July 10, 1927 in Kobe, Japan to the late Heroshi and Yoshiko Kanazawa. She moved to the United States in 1952. She worked at Hollywood Vassarette in Princeton, IL, and later at Jostens where she worked for over 20 years, retiring on Dec 2, 1985. She married the late Neil “Bud” Scherer on December 11, 1976 at the First Methodist Church of Princeton, IL. They were married for 38 years before his passing in 2015. She was an active member of First United Methodist Church where she loved her church community and family. She enjoyed being part of the church’s Prayer Shawl group. Kay was a great cook and loved to bake and share her cookies with family and friends. She enjoyed crocheting and made beautiful baby blankets. She and Bud enjoyed traveling and taking long drives to enjoy nature. They retired to Spring Hill, Florida, where they were very active with friends and in their church. After 13 years, they moved back to Illinois to be closer to family and friends. Kay had a very kind-hearted and giving spirit and her home was always full of love. She is survived by one daughter, Linda (Tony) Perkins – Chillicothe, IL; one son, Donald Johnson of Princeton, IL; one step daughter, Vicki (Richard) Mair of Princeton, IL; two step sons, Keith (Cherie Martin) Scherer of Princeton and Darryl (Donna) Scherer of Maryville, TN; eight grandchildren; ten great grandchildren; and several nieces, nephews and cousins. Kay was preceded in death by her husband and parents. In lieu of flowers, memorials may be directed to the First United Methodist Church in Princeton, IL or Harbor Light Hospice, 3000 N. Main, Unit C, East Peoria, IL 61611. A celebration of life will be held at a later date and time. Online condolences may be left at www.norbergfh.com Arrangements by Norberg Memorial Home, Inc. & Monuments.

Princeton, IL &#8211; Kay K. Scherer 92, of Princeton passed away peacefully at Heritage Health in Chillicothe on Monday, April 13, 2020 with her daughter and son-in-law by her side. Kay was born on July 10, 1927 in Kobe, Japan to the late... View Obituary & Service Information

The family of Kay K Scherer created this Life Tributes page to make it easy to share your memories.

Send flowers to the Scherer family.