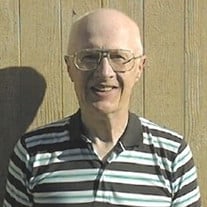 Albuquerque, NM - Kenneth R. Bouxsein, 84, passed away Monday, June 1, 2020, in Albuquerque, New Mexico. Ken was born to Otto Bouxsein and Bernice Richardson on June 23, 1935, in Princeton, Illinois, the oldest of 3 boys, followed by Eric and lastly myself, Stephen. Shortly after graduating from Princeton High School Ken enlisted in the United States Air Force. Honorably discharged four years later, he moved to Dayton, Ohio, to attend a work-study school where he specialized in architectural and mechanical drafting. After some years employed in this profession he moved to Southern California to join IBM as a field representative and technician. Several years later he retired from IBM to move to Edgewood, New Mexico, where he bought a small ranch, and together with a partner opened and managed a restaurant in town they named, “Burger Boy.” Happily serving the local population for many years Ken sold the business after his partner passed away. He then fully retired, sold his ranch, and moved into a comfortable apartment in The Three Fountains Apartments where he continued to live a healthy and active life for these past 20 years, until his passing in June. Funeral services were held at the Wyoming Chapel of Daniels Family Funeral Services, and Ken’s final resting place will be next to our parents and brother in our family plot at the Oakland Cemetery in Princeton, Illinois. Throughout his lifetime Ken enjoyed many and varied activities. During Ken’s Air Force days stationed in Western Europe he travelled all over Germany, France and Switzerland on his sturdy, dependable BMW motorcycle, taking countless 35mm slides along the way to send home to our family in Illinois. Many hours I enjoyed, as a child, projecting those vivid, colorful pictures of the local people and gorgeous landscapes he encountered on his many excursions! During his years with IBM he was a member of the company’s Lido 14 sailboat club. I still remember the thrill I felt when he took our Dad and me out into the open ocean for the first time, beyond the safe harbor of Marina Del Rey, California. Riding up and down the swells, salty breeze blowing in our faces, I was amazed watching the “flying fish” dart past us as our little boat bounced along. It was my first time seeing the panoramic Santa Monica Bay from the ocean—magnificent! Sometime later Ken enrolled in flying lessons to obtain his private pilot’s license. Many times Ken was able to take our father, a former pilot himself, up for an aerial sightseeing tours of Los Angeles and Orange Counties. Ever the faithful, responsible and supportive eldest son, Ken was always there for our family in times of personal and financial trials, helping us through those difficult experiences on to better times ahead. Ken and I have been the only surviving members of our family these past 40 years. Kenny, you will always be remembered and loved for your loyalty, care and quiet, determined nature, and remain in my heart throughout life! Funeral services will be held at the Daniels Family Funeral Services - Wyoming Chapel in Albuquerque, New Mexico. A graveside service will be held at the Bouxsein family plot in the Oakland Cemetery in Princeton, Illinois on Thursday, July 2, 2020 at 10:00 a.m. officiated by Reverend Carl Johnson. Arrangements by Norberg Memorial Home, Inc. and Monuments. online condolences may be left at www.norbergfh.com

The family of Kenneth R Bouxsein created this Life Tributes page to make it easy to share your memories.

Send flowers to the Bouxsein family.