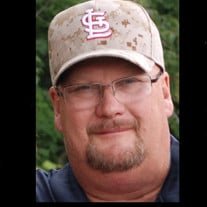 PRINCETON – Kevin Alan Marsh, 58, of Princeton, IL passed away in the comfort of his own home on Saturday, September 7, 2019. Kevin was born on August 24, 1961 in Kewanee, IL to Shirley (Powers) Marsh and Jerry Marsh. He was a graduate of Kewanee High School Class of 1979. Shortly thereafter, he joined the U.S. Army and proudly served his country from 1979 through 1983. He worked as a truck driver after his military service, his final position was working for Carly Carriers. Kevin married Pam (Pratt) Marsh in Las Vegas, NV, on June 27, 2000, something he wasn’t sure would happen after their first date, when he took Pam fishing and turned the boat over. He lovingly nicknamed her Moses, as he said she loved to preach to him about life. He enjoyed volunteering for the Princeton Chamber of Commerce as Santa Clause and many other local events. He is the co-creator of the “Man Page” for the Bureau County Republican. He was a member of Friends of Strays and volunteered for many years at their animal shelter. Kevin was a volunteer fire fighter in Tiskilwa, IL and an ordained minister. Kevin loved to laugh and was quite the practical jokester. He enjoyed coaching his kids’ sports teams and he was an avid outdoorsman. Some of his best memories were shared with his son Ryan on fishing trips. He enjoyed watching “Bama” football “Roll Tide Ya’ll!”, the Kansas City Chiefs and St. Louis Cardinals. Kevin loved to golf and spend time with his dogs Cookie and Louise. He is survived by his loving wife of 19 years, Pam (Pratt) Marsh of Princeton; his mother, Shirley Powers Marsh of Kewanee, IL, one brother, Joey Marsh of Kewanee, IL; two children, Ryan (Holly) Marsh of Hansville, WA and Autumn Marsh of Kewanee, IL; six stepchildren, Paul Pratt, Rachel Pratt, Blake (Bridgett) Pratt, Rob Willey, Ronald Willey and Jennifer Willey; four grandchildren, Ryan Marsh Jr., Addison Marsh, Henry Marsh and Greyson Pratt. Kevin is preceded in death by his grandparents, Lawrence and Darlene (Granny) Powers, Lawrence and Eva Marsh, Uncles Butch Powers, Terry Powers, Skip Powers, Jack Marsh and Glen Marsh. A visitation will be held on Thursday, September 12 at Norberg Memorial Home, Inc. & Monuments in Princeton, IL from 4:00 p.m. to 6:00 p.m. Services for Kevin will be on Friday, September 13, 2019 at 11:00 officiated by Reverend Scott Schmidt at Norberg Memorial Home, Inc. & Monuments, Princeton, IL. In lieu of flowers memorials may be directed to the family. Online condolences may be left at www.norbergfh.com Arrangements by Norberg Memorial Home, Inc. & Monuments.

PRINCETON &#8211; Kevin Alan Marsh, 58, of Princeton, IL passed away in the comfort of his own home on Saturday, September 7, 2019. Kevin was born on August 24, 1961 in Kewanee, IL to Shirley (Powers) Marsh and Jerry Marsh. He was a graduate... View Obituary & Service Information

The family of Kevin A Marsh created this Life Tributes page to make it easy to share your memories.

Send flowers to the Marsh family.