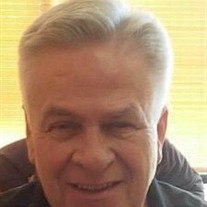 Princeton - Larry Arthur Owens, 69, of Princeton, IL passed away suddenly on Thursday, June 17, 2021 at his home. Larry was born on January 15, 1952 to the late Floyd and Lorraine (Alshouse) Owens in Princeton, IL. He was a graduate of Amboy High School, class of 1970. He married Paula Kagay on November 22, 1970 and they had a son together, Jason. Though their marriage ended they remained close. He remarried Dina Burrell on July 14, 1995 in Bloomington, IL and together they had a son, Samuel. He spent many years as a motorcycle racer and mechanic. Even after leaving that career, his enthusiasm for motorcycles remained as well as enjoying casual rides and repairing other riders' bikes. He suffered a serious accident in July 2014 and was no longer able to race or ride; but still managed to repair bikes. Previous to that, he worked at an auto dealership before retirement. Larry loved his motorcycles and everything to do with them. He would tinker around repairing them and replacing parts. After his accident, his talent for woodworking became apparent in addition to his skills as a painter. He was a jack of all trades and very handy. He enjoyed all movies but was quite the fan of medieval eras and comedies. His favorites were Rob Roy, Highlander, Shawshank Redemption, Young Frankenstein, Blazing Saddles, and The Last of the Mohicans, just to name a few. He could find a movie quote for almost any conversation. He was a man who loved his ice cream, especially butter pecan, but honestly, he just loved any flavor. He enjoyed trips with his family. Some of his favorites were the trips to Florida in 2001 and in 2011 to Niagara Falls. He built two homes for his families throughout his lifetime and was really someone that could do almost anything; living life to its fullest extent. He was a man's man and to his family, he was the bravest soul. Larry is survived by his wife, Dina Owens, of over 25 years; two sons, Jason (Melissa) Owens of Norfolk, VA and Samuel (Jennifer) Owens of Peru, IL; one sister, Deborah (Brian) Harris; and his first wife and mother to his son Jason, Paula Owens; a niece Janelle (Rick) Pertell and their two children. He is preceded in death by his parents, Floyd and Lorraine Owens, one brother, William Owens and one nephew, Shawn Owens. In lieu of flowers, memorials may be directed to American Heart Association. The family will receive friends on Friday, June 25, 2021 from 10:00 a.m. to 11:00 a.m. at Norberg Memorial Home, Inc. & Monuments in Princeton, IL. Services to follow at 11:00 a.m. officiated by Pastor Ryan Sutton. Cremation rites accorded. Online memorials and condolences may be directed to www.norbergfh.com Arrangements by Norberg Memorial Home, Inc. & Monuments.

Princeton - Larry Arthur Owens, 69, of Princeton, IL passed away suddenly on Thursday, June 17, 2021 at his home. Larry was born on January 15, 1952 to the late Floyd and Lorraine (Alshouse) Owens in Princeton, IL. He was a graduate of Amboy... View Obituary & Service Information

The family of Larry Arthur Owens created this Life Tributes page to make it easy to share your memories.

Send flowers to the Owens family.