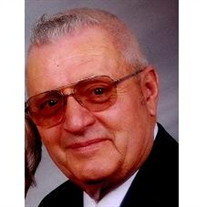 Wyanet – Leslie H Wooden, 81, of Wyanet, Illinois passed away at Morton Terrace on Saturday, October 13, 2018, surrounded by loved ones. Leslie was born on September 13, 1937 to Gilbert and Bernice (Howell) Wooden in Princeton, IL. He attended Bradford High School and soon after joined the US Navy where he served 8 years and then became an owner/operator of a semi-truck, and had the opportunity to see the United States. He started his family, raising three children. He met and married his loving wife Margaret (Hoover) Wooden on September 15, 1989 in Springfield, IL. He was a member of the Lions Club serving as District Governor in District 1K, he was also a member of the Elks Club in Princeton, IL. Leslie enjoyed golfing, reading, traveling, socializing and above all giving his children a hard time and spending time on the road with his wife, Margaret. He is survived by his wife, Margaret, three children; Dale Wooden, Jeanette (Brian) Keim, Brian (Karen) Wooden. Four step-children; Shari Baudoux, Michael (Dara) Carr, Laura (Ralph) Salzillo, Randall Carr. Seven grandchildren, six great grandchildren and one brother; Paul Wooden. Leslie was preceded in death by his parents, four brothers; Raymond Wooden, David Wooden, Larry Wooden and Dennis Wooden. Leslie is a proud Anatomical Gift Donor and has asked that there be no services. He was an avid supporter of the Lions Club and asked that any memorials be directed to the Lions Club Vision Program or The Parkinson’s Foundation in his name. Online condolences may be left at www.norbergfh.com

Wyanet &#8211; Leslie H Wooden, 81, of Wyanet, Illinois passed away at Morton Terrace on Saturday, October 13, 2018, surrounded by loved ones. Leslie was born on September 13, 1937 to Gilbert and Bernice (Howell) Wooden in Princeton, IL. He... View Obituary & Service Information

The family of Leslie H Wooden created this Life Tributes page to make it easy to share your memories.

Send flowers to the Wooden family.