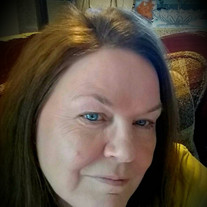 Van Orin, IL – Linda K. Jauch 71, of Van Orin, IL passed away at her home on Sunday, November 22, 2020. Linda was born in Triumph, IL on September 8, 1949 to the late Ross and Ruth (Tomlin) Worsley. She worked more than 20 years of her life as a line worker for Plano Molding starting in Earlville and then moving to Mendota. She loved to play Sudoku and enjoyed challenging her mind. She loved to garden, from flowers to vegetables, there wasn’t anything she couldn’t grow. She loved to dance, not formally, just whenever she heard a song she liked, she couldn’t stop herself from dancing, no matter where she was, in her kitchen or out with her friends. She loved cooking, German potato salad, corn beef and cabbage and lentil soup were some of the family favorites. She knitted and crocheted in her earlier years. She like to watch movies, especially old westerns. She loved spending time with her children and grandchildren and her four legged, constant companion Cordell, who is feeling slightly lost right now without his master. Linda is survived by her three children, Jack (Tanya) Hayes of Geneseo, IL, Ernest Jauch of Princeton, IL and Christine (Doug) Kessinger of La Moille, IL; five grandchildren, Trace Hayes, Cameron Fandel, Chaney (Bryan) Dixon, Lance Kessinger and Bret Kessinger; four great grandchildren, Gabe Kessinger, Joslyn Simpson, Greyson Simpson and Xander Dixon; three siblings, Butch (Linda) Worsley, Lorraine Manning and Ed (Sue) Olsen; and her beloved pet Cordell. She is preceded in death by her father, Ross Worsley, and her mother and step-father Ruth and Stanley Olsen, four brothers, Dougie Worsley, Dwayne Worsley, Raymond Worsley and Jim Worsley. In lieu of flowers, memorials may be directed to the family for charitable distribution. Due to the current pandemic, the family has opted for private services at a later date and time. Online condolences and memorials may be directed to www.norbergfh.com Arrangements by Norberg Memorial Home, Inc. & Monuments

The family of Linda Kay Jauch created this Life Tributes page to make it easy to share your memories.

Send flowers to the Jauch family.