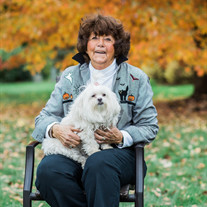 Princeton – Lois Darlene Bomleny Beaber 84, passed away on Saturday, January 9, 2021 at her home in Princeton, IL. Lois was born to the late John and Elizabeth (DeBlieck) Bomleny in Annawan, IL on October 29, 1936. She attended Princeton High School, where she met and later married, the Late Russell C. Beaber of Princeton. He was a football player and she was a cheerleader. He always lovingly referred to her as Lizzie. She and her late husband owned and operated Beaber’s Lunch Room on North Main St. in Princeton, IL until it closed in 1985. Known for its ham or meatloaf dinner for 0.85 cents, their fried chicken, homey feel and super-fast service. She loved socializing with all of their customers. A place where people would come for the fresh hot coffee and stay for the conversation. Russ and Lois managed the Elks Lodge #1461 in Princeton before retirement. Lois was a member of the Princeton Elks, Princeton Moose, Wyaton Hills Golf Corse, Bureau Valley Country Club and the Bureau County Metro Center. She enjoyed golfing, playing cards, especially bridge. She liked taking bus trips with friends through Green Rivers Bus Trip Tours. Lois loved supporting the arts and going to plays, at Pheasant Run or Festival 56. She loved her community and helping wherever needed. She was a social butterfly and knew she would run into a lot of friends at Wal-Mart, where a shopping trip usually took 2 to 3 hours because she had to stop and chat with everyone. She adored her dog Missy, a poodle-maltese mix. Her favorite time was always being a Nana. Time spent with her grandchildren always overruled everything. In lieu of flowers, memorials may be directed to the Princeton Animal Shelter in Lois name. Lois is survived by her two children, Rebecca Beaber Steczo of DeKalb, IL and Rodney (Rhonda) Beaber of Princeton, IL; five grandchildren, Andrew (Emily) Steczo, Natalie (Brian) Bartmess, Ian Steczo, Paige (Luke) Heaton, Baily (Kody) Shipp; six great grandchildren, Aiden, Alex, Lydia, Ruby, Andrew and Lainey; two sisters, Pat Anson and Janice Heaton both of Princeton. As well as numerous nieces, nephews and cousins. She was preceded in death by her husband, Russell C. Beaber and her parents, John and Elizabeth Bomleny. Private services will be held for the family at Norberg Memorial Home, Inc. & Monuments officiated by Pastor Ryan Sutton and followed by internment at Oakland Cemetery. Online memorials and condolences may be left at www.norbergfh.com Arrangements by Norberg Memorial Home, Inc. & Monuments.

Princeton &#8211; Lois Darlene Bomleny Beaber 84, passed away on Saturday, January 9, 2021 at her home in Princeton, IL. Lois was born to the late John and Elizabeth (DeBlieck) Bomleny in Annawan, IL on October 29, 1936. She attended Princeton... View Obituary & Service Information

The family of Lois D Beaber created this Life Tributes page to make it easy to share your memories.

Send flowers to the Beaber family.