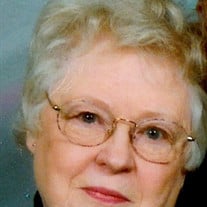 Lois (Loftus) Darling, 88 passed away on Wednesday, 8/23/17. Lois was a long time resident of Princeton, IL and had spent the last two years living at the Marian Village Assisted Living Community in Homer Glen, IL, near family. Lois and her... View Obituary & Service Information

The family of Lois Darling created this Life Tributes page to make it easy to share your memories.

Send flowers to the Darling family.