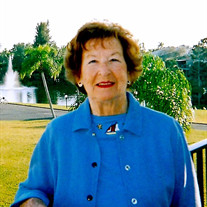 Princeton - Nettie M. Dawson, “Marie” as she was known to all of her friends and family, passed away peacefully in her sleep on Wednesday, October 7, 2020, at Aperion Care of Princeton, IL. She was 95 years young. She was born on February 24, 1925, in Galva, Illinois, to Charles and Mabel (Heflen) Steagall. She had 2 half-sisters, Lucille and Florence and siblings, David, Gerald, Harriett and Doris. Marie was a devoted wife and mother, loving Aunt, a fun-loving friend, a creative cook who could really make the food stretch, a wonderful baker, an avid bowler and golfer, the “hostess with the mostest” at her parties which she loved to have, and a gardener, planting flowers and herbs in her yard and tending to them. She did it all with grace and beauty. She was a kind person who taught her children to be independent and to be whatever they wanted to be. She was not a big fan of TV except for the show “THE BACHELOR”! However, she loved to read and kept up with all current events reading several newspapers daily. She taught her children that they were not better or different from anyone else and if you worked hard you could accomplish anything you put your mind to. She was a feisty lady and a fighter, being a breast cancer survivor. Marie married James (Bud) Roberts on November 22, 1941. They had 6 children, and she was very proud of each of them. Despite the large family she always made time for everyone and provided love and support to her family. The family home in Buda was often the gathering place for all the friends and relatives. She later married Warren “Weedo” Dawson on April 4, 1983. They were the cutest couple around enjoying excursions in their little yellow Mustang convertible and enjoying traveling to Florida each year to visit with Rick and Judi Torricelli and granddaughter, Jessica. Weedo and Marie survived the 1989 magnitude 6.9 earthquake in San Francisco when the Bay Bridge collapsed and the Giants played in the World Series. It was a frightening experience that they made light of, however she never again wanted to be in a hotel room that was high up. Marie led a life full of adventure enjoying traveling with both her first husband as he was in the military and with Weedo. She worked much of her life outside the home as a bookkeeper and dispatcher for the Roberts Family Trucking Company and later as a cook at Prairie View Nursing Home. She was a lifetime member of the Elks, belonged to the Moose Lodge and the American Legion Auxiliary. She experienced many changes in the world during her long life from living through the depression to days of cable TV, cell phones and internet. She is survived by her six children, Dennis (Diana Renner) Roberts of Lancaster, PA, Kay (Gary) Fulkerson of Jacksonville, IL, Patti Ann (Sean) Moynihan of Princeton, IL, Daniel (Cindy) Roberts of Kewanee, IL, Susan (Robert) Johnson of Princeton, IL and Judi (Richard) Torricelli of Fort Myers, FL; ten grandchildren, David Roberts, Greg Fulkerson, Debbie Hetzel, Tammy Mellor, Doug Fulkerson, Kyle Johnson, Evan Johnson, Amy Burgard, Michelle Burton and Jessica Torricelli; seventeen great grandchildren, Allie Holler, John Holler, Samantha Hillman, Michael Hetzel, Lydia Mellor, Paul Mellor, Layla Fulkerson, Audrey Fulkerson, Eric Fulkerson, Anya Porter, Ardyn Johnson, Marek Johnson, Ewyn Johnson, Zack Burgard, Olivia Burgard and Max Burgard; and three great-great grandchildren, McKenzie McMenamin, Alexis McMenamin and Hailey McMenamin; as well as several nieces, nephews and cousins. She was preceded in death by her parents Mabel and Charles Steagall, her first husband James “Bud” Roberts, her second husband Warren “Weedo” Dawson, two grandchildren, Amy Roberts Holler and Aaron Porter, one great grandchild, Zoe Porter, two half-sisters, Lucille and Florence and siblings, David, Gerald, Harriett and Doris. The family grieves her loss but takes comfort in knowing she is reunited with her husband, Weedo, her grandchildren, great grandchild and siblings, as well as all her family and many friends that predeceased her. In lieu of flowers, memorials may be left to the family for charitable distribution. A celebration of her life will be held at a later date and time. Arrangements through Norberg Memorial Home, Inc. & Monuments. Online condolences and memorials may be left at www.norbergfh.com

Princeton - Nettie M. Dawson, &#8220;Marie&#8221; as she was known to all of her friends and family, passed away peacefully in her sleep on Wednesday, October 7, 2020, at Aperion Care of Princeton, IL. She was 95 years young. She was born on... View Obituary & Service Information

The family of Marie Dawson created this Life Tributes page to make it easy to share your memories.

Princeton - Nettie M. Dawson, “Marie” as she was known to all...

Send flowers to the Dawson family.