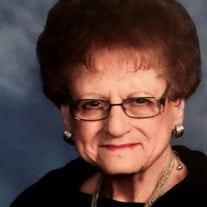 Princeton – Marilyn I. Johnson, 82, of Princeton, IL passed away on Sunday February 10, 2019 at Aperion Care, surrounded by loved ones. Marilyn was born on March 7, 1936 in Walnut, IL to the late William and Iva (Martinson) Crane. She was a graduate of Princeton High School, Class of 1954. She married the late Marvin Johnson on October 3, 1954. Marvin and Marilyn started their family and she began working for Ohio High School, Ohio, IL, as the bookkeeper in 1967 and retired in 2016 after 49 years of service. She was a member of the First Lutheran Church in Princeton as well as the Women’s Auxiliary at the First Lutheran Church of Princeton, IL. Marilyn loved to crochet and really enjoyed spending time with people, having good conversation over a cup of coffee. She was a great story teller and enjoyed cooking and baking, spending time gardening, farming, raising livestock and crafting. You could catch her and Marvin listening to the polka radio station on vacation with friends. She enjoyed watching The Price Is Right, Wheel of Fortune and the Lawrence Welk Show. She loved her animals, specifically her poodle Annie, but most of all, she loved to spend time with her family, especially her grandchildren. She is survived by two daughters, Bonnie (Joe) Pearson of Van Orin, IL and Jean (Alvin) Goeking of Rockford, IL; one son-in-law, Ken Sadowski of LaSalle, IL; four grandchildren, Erica Goeking, Ashley Goeking, Drew (Michelle) Pearson and Dillion Pearson; and one great grandchild, Fitzgerald Pearson. Marilyn is preceded in death by her parents, her husband, Marvin Johnson (12/02/2014); one daughter, Nancy Sadowski. A Celebration of Life will be held on Wednesday, February 13, 2019 at 1:00 p.m. at the First Lutheran Church of Princeton, IL, officiated by Reverend Bill Shields. A graveside service will be held at a later date and time. In lieu of flowers, memorials may be directed to the First Lutheran Church of Princeton, IL. Online condolences may be left at www.norbergfh.com Arrangements by Norberg Memorial Home, Inc & Monuments.

Princeton &#8211; Marilyn I. Johnson, 82, of Princeton, IL passed away on Sunday February 10, 2019 at Aperion Care, surrounded by loved ones. Marilyn was born on March 7, 1936 in Walnut, IL to the late William and Iva (Martinson) Crane.... View Obituary & Service Information

The family of Marilyn I Johnson created this Life Tributes page to make it easy to share your memories.

Princeton – Marilyn I. Johnson, 82, of Princeton, IL passed away...