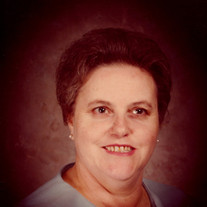 Princeton – Marilyn R. Sartain, 88, of Princeton, passed away on Sunday, February 10, 2019 at Aperion Care Princeton, surrounded by loved ones. Marilyn was born on March 10, 1930 to Earl and Evelyn (Bristol) Bedell in Nashau, NH. She graduated from Pepperell High School in Nashua, NH, Class of 1947. She met her husband, James Sartain, through her sister Jean at their church in Los Angeles. She married James in Las Vegas, NV on August 7, 1957. Marilyn worked as an operator for the telephone company, as well as a bank teller and she also worked at The Music Center in Los Angeles, CA before the family had to move to Princeton where her husband James, who was a telephone contractor was transferred. The family settled in Princeton in 1968 and Marilyn worked as an administrative assistant for a local law firm in Princeton. She also spent time working at the Ark Book Store and sold Tupperware for many years, from LA to Illinois. She loved to paint and make ceramics, she enjoyed cross stitching and painting figurines. She was especially good at fine details. She was known to be quite the seamstress, sewing many of her children and grandchildren outfits and attire for school, church plays and Halloween costumes. She was an avid bowler at the former Crown Lanes in Princeton. She led a bible study group and taught Sunday school and was very active in her church, including a long standing member in her church choir. She loved animals, especially her favorite cat Babe. She was a lifelong New England Patriots fan and really enjoyed baking, much to James, the kids and grandkids joy. She had a great love for children, especially her grandchildren and the neighborhood kids, who always knew the door was open and they had a safe place to play. She was loved by all and shall be greatly missed. Marilyn is survived by her husband of nearly 62 years, James Sartain, three children, Karin (Sam) Baugh of Princeton, IL, Troy (Donna) Sartain of Mayfield Heights, OH, and Joe (Andrea) Sartain of Batavia, IL; eleven grandchildren, Scott (Donna) Michael, CJ (Courtney Hartmann) Michael, Danny Michael, Ben (Laura) Michael, Stephanie (Robert) Crichlow, Matthew Sartain, Emily Sartain, Joey Sartain, Eric Sartain, Brian Sartain and Grace Sartain; six great grandchildren, Jamie, Dawson, Lexy, Brevyn, Augie and Tommy; one granddaughter-in-law, Tara Michael; and four step grandchildren. She is preceded in death by her parents, one daughter, Susan Gail Sartain Smith; two sisters May Hazen, Jean Schofield, two brother-in-law’s, Robert Hazen and Don Schofield. A celebration of life will be held on Saturday, February 16, 2018 at Norberg Memorial Home, from 10:00 a.m. to 12:00 p.m. at 12:00 p.m. Pastor Chad Delhotal will say a few words. In lieu of flowers, memorials may be directed to the Friends of Strays, 2845 N. Main St. Princeton, IL. Online condolences may be left at www.norbergfh.com Arrangements by Norberg Memorial Home, Inc. & Monuments, Princeton, IL

The family of Marilyn R. Sartain created this Life Tributes page to make it easy to share your memories.

Send flowers to the Sartain family.