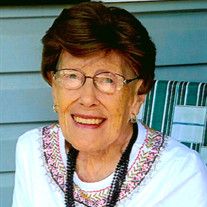 PRINCETON — Marge McDonald of Princeton passed away Saturday, Nov. 25, 2017, at Perry Memorial Hospital in Princeton. She was born March 12, 1925, in Manlius, the only child of Glenn Balla and Mabel (Carlson) Balla. She married Bernard "Mac" McDonald in 1954, celebrating 23 years of marriage prior to Mac's death in 1978. She enjoyed living in the home that was built by "Mac" for 62 years at 1025 W. Central Ave. in Princeton. In 1990, she married Clifford Johnson. They celebrated 22 years of marriage prior to his death in 2012. After graduating from Sheffield High School in 1943, she, along with her parents, owned and operated The Bright Spot Restaurant on Main Street in Princeton. Following that she owned Marge's Grocery, an icon in Princeton, for 27 years. When she sold the grocery store in 1978, she began working at Bureau County Farm Service until she retired at the age of 75. She was a member of Hampshire Colony Congregational Church in Princeton for over 50 years. She was an active member of Order of the Eastern Star for many years. Marge volunteered as a Gold Coat at Perry Memorial Hospital in Princeton for over 15 years until the age of 91. What she loved most in life was spending time with family. Other activities she enjoyed included playing bingo, cards and knitting. Marge is survived by her daughters, Lindy (Kevin Curtin) McDonald of Peoria and Lisa (Scott) Etheridge of Bloomington; two stepchildren, Linda (Thomas) Meyer of Erie, Colo., and Keith (Lorena) Johnson of Aurora, Colo.; six grandchildren, Mackenzie (Mike) Morey, Bailey (Mark) Bevill, Andy (Lindsey) Etheridge, Molly Etheridge, Sully (Laura) Curtin and Peyton Curtin; four stepgrandchildren, Natalie and Margret Johnson, Vanessa (Jacob) Nuechterlein and Paul Meyer; two great-grandsons, Asher and Finley Morey; and two great-granddaughters, Emma and Brooke Nuechterlein. Services will be at 10:30 a.m. Thursday, Nov. 30, at the Norberg Memorial Home in Princeton. Visitation will be from 5 to 7 p.m. Wednesday, Nov. 29, at the funeral home. Pallbearers will be Andy Etheridge, Sully Curtin, Mike Morey and Mark Bevill. In lieu of flowers, the family has asked that donations be directed to Hampshire Colony Congregational Church or Perry Memorial Hospital. The family would like to thank the caring staff of Perry Memorial Hospital for the excellent support in her final days. Online condolences may be left at www.norbergfh.com.

PRINCETON &#8212; Marge McDonald of Princeton passed away Saturday, Nov. 25, 2017, at Perry Memorial Hospital in Princeton. She was born March 12, 1925, in Manlius, the only child of Glenn Balla and Mabel (Carlson) Balla. She married Bernard... View Obituary & Service Information

The family of Marjorie Lynn McDonald created this Life Tributes page to make it easy to share your memories.

Send flowers to the McDonald family.