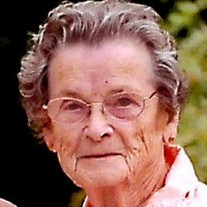 Martha N. Taylor PRINCETON — Martha Nadine Taylor, 96, of Princeton passed away Monday, Dec. 11, 2017, at Cabin Livin in Hennepin. Born Nov. 9, 1921, in Cantrell to Harry and Florence (Onstatt) Clark, she married Bernard Taylor March 1, 1947. She was employed by Vassarette, Jostens, Perry Memorial Hospital, Voyager Inn, Ricey’s Restaurant and Garden Room. When she was young, she worked in the shipyards, and was a homemaker, gardener and farmer. She enjoyed family time, gardening and farming. In general, her children said she was the hardest worker they had ever known. Surviving are one daughter, Dorothy (Tim) Williams; two sons, Stanley (Deb) Taylor and Ralph (Larissa) Taylor; five grandchildren, Taylor (Jake) Williams-Holland, Rachel Taylor, Joe (Eilidh) Taylor, Stanley Taylor Jr. and Jeff (April) Taylor; six great grandchildren; one sister-in-law, Betty Clark; two great grand puppies and many nieces and nephews. She was preceded in death by her husband, Bernard Taylor, in August 1991; her parents, Harry and Florence Clark; and brothers and sisters. Services will be at 11 a.m. Saturday, Dec. 16, at the Norberg Memorial Home in Princeton with the Rev. Richard Hillenbrand officiating. Burial will be in Elm Lawn Memorial Park in Princeton. Visitation will be one hour prior to the services Saturday in the funeral home. Pallbearers will be John Dixon, Mark Dixon, Al Taylor, Tim Taylor, Tony Taylor and James Taylor. Memorials may be directed to Cabin Livin in Hennepin. Online condolences may be left at www.norbergfh.com.

The family of Martha N. Taylor created this Life Tributes page to make it easy to share your memories.

Send flowers to the Taylor family.