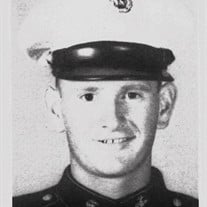 Princeton – Marvin D. Peters, 80, of Princeton, IL. passed away on Friday, December 18, 2020 at Perry Memorial Hospital in Princeton, IL. Marvin was born in Lexington, Oklahoma to the late Forrest and Thelma (Carpenter) Peters on May 30, 1940. Shortly thereafter the family moved to West Chicago, IL, he was a graduate of West Chicago High School, Class of 1958. He met his life love, Arlene White on a blind date. He was never good with names, so he always remember Arlene’s last name by repeating to himself, “absence of all color”. He took Arlene to the movies on their first date and they knew it was love. They married on April 14, 1961 in Batavia, IL. He also served in the United States Marines from 1960 – 1966, honorable discharged as a Corporal. He worked for a short time for Sears as a mechanic. Then working for Western Electric. He retired from General Mills after working there for 33 years, retiring in 2004. He was also the founder of the Emergency Response Team at General Mills for 14 years. He was a member of the Loyal order of the Moose, Boy Scouts Scout Leader for over 7 ½ years, coached little league baseball and was also in 4-H when he was younger. He was a member of United Methodist Church of Batavia, IL, as well as the United Methodist Church of Princeton, IL. Marvin loved stock car racing, hunting, fishing and woodworking. He was very outdoorsy. He was quite the woodworker also, making many thing for his loving wife, family and friends. He enjoyed camping and gardening, he loved to help people and you could easily find him volunteering. He had so much love and laughter in his world and never took life too seriously. He was considered a true humanitarian. His greatest achievements were always his wife, children, family and especially his grandchildren. They were the loves of his life. He is survived by his wife of 59 years, Arlene (White) Peters; two children, Babette (Dale) Warfel of Geneva, IL and Brian (Terri) Peters, Sr. of Aurora, IL.; four grandchildren, Eric (Danielle) Warfel, Kevin (Erika Kimmer) Warfel, Brian (Ariel) Peters, Jr. and Sabryna (John Hamilton) Peters; four great grandchildren, Wyatt, Colten, Avery and Lucas; one sister, Evelyn Rackmyer; not to mention his loyal beloved four legged companion, Brady, as well as several nieces, nephews and cousins. Marvin is preceded in death by his parents, Forrest and Thelma Peters, one brother, Kenneth Allen Peters, one brother-in-law, Jack Rackmyer and his step mother Nellie Peters. In lieu of flowers, memorials may be directed to the United Methodist Church. A memorial service will be held at a later date and time. Online condolences and memorials may be left at www.norbergfh.com Arrangements by Norberg Memorial Home, Inc. & Monuments.

Princeton &#8211; Marvin D. Peters, 80, of Princeton, IL. passed away on Friday, December 18, 2020 at Perry Memorial Hospital in Princeton, IL. Marvin was born in Lexington, Oklahoma to the late Forrest and Thelma (Carpenter) Peters on May... View Obituary & Service Information

The family of Marvin DeLaine Peters created this Life Tributes page to make it easy to share your memories.

Send flowers to the Peters family.