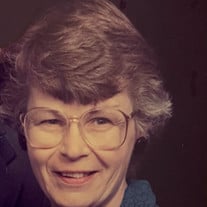 Princeton - MaryAnn Nink, 82 and 51 weeks, passed away on the morning of Friday, October 29, 2021 at Heartland Healthcare Center in Henry, IL. MaryAnn was born Nov 3, 1938 in Lemont Illinois to Anna Lucille (Bodenschatz) and Philip Andrew Seiler, the first of four children. She was very involved in Girl Scouts (was awarded the First Class Badge, second highest rank in Girl Scouting) and received several scholarships to attend Northern Illinois University, where she graduated with a bachelor's degree in Elementary Education in 1960. She was also a member of the service sorority, Alpha Xi Delta. MaryAnn married James E. Nink in June 1960 and lived initially in Streator Illinois. They had four children, Dennis Nink, of Princeton IL, Theresa (Terri) Nink Baugher of Virginia, James A. Nink currently of Frankfurt, Germany, and then with the addition of Stephen Nink of St. Charles IL, they moved to Princeton, IL. She was very involved in Princeton's community, looking for ways to improve the lives and develop the minds of its children. She taught (mostly 4th or 5th grade, with an emphasis on Social Studies and History) at several of the town's schools, and many children (and their children) will remember Mrs. Nink as part of their educational experience. She also helped develop and instruct St. Louis Church's CCD program and stayed involved with St Louis Church for decades. Faith was very important to MaryAnn; the support and guidance she and husband Jim received from their involvement in the community of St. Louis School as a teacher and the community outreach of St. Louis sustained her throughout her life. She was instrumental in developing the early versions of Princeton's DayCare and After-school programs, brought the first Safety Town program to Princeton, and was very active for decades in first the Cub Scouts with her husband and sons, then with the Girl Scouts with Terri, as a troop leader at all levels and a member of the Kickapoo Council regional board. She was also a member of the Junior Women's Club and Home Extension. She and Jim helped deliver Meals on Wheels for several years, sometimes with children in tow. In addition to her teaching in the schools, MaryAnn was an avid history buff, and volunteered at both the Lovejoy Homestead and Bureau County Historical Museums as a docent, giving tours that were a continual patter of information, demonstrating her amazing depth of knowledge for both the history of the particular items and of the community. MaryAnn somehow also found time to raise four children (with Dad) in the 70's as an active working mother...Band-Aids were for real blood, not bumps; you were expected to be at school unless you had a fever or were vomiting; she called us home from play with a blast on a schoolyard whistle; and expected us to clean our plate (or see it in the morning for breakfast). Mom and Dad as a team never missed a game or performance, and it was reassuring to know they were out there when the stage lights were on. Somehow, they always provided--team uniforms, music lessons and instruments. Mom was skilled at sewing clothes and quilts, and some of those still warm those she loved. She was an avid vegetable gardener and shared her prized tomatoes with one and all. She was always busy, and not surprisingly drank plenty of black coffee to assist her in her efforts. Some of her favorite sayings (she had a few) were that "Everyone has the same 24 hours in a day. What are you going to do with yours?" and "We are all responsible for our own happiness". Words to live by. Over the last years, Alzheimer's slowed her down considerably, and the community is poorer for it. MaryAnn leaves behind a life full of love and service to others and will be very sorely missed by her friends and family as a loving, stubborn force of nature who loved to learn and share with others. In addition to her children mentioned above, she has 9 grandchildren and 14 great grands, as well as many, many extended family. A visitation will be held on Wednesday, November 3, 2021 from 4:00 - 6:00 p.m. at Norberg Memorial Home, Inc. & Monuments Services for MaryAnn will be on Thursday, November 4, 2021 at 10:00 a.m. at St. Louis Catholic Church, officiated by Monsignor James Kruse. Graveside to follow at Oakland Cemetery in Princeton, IL Online condolences and memorials may be directed to www.norbergfh.com Arrangements by Norberg Memorial Home, Inc. & Monuments.

The family of Mary Ann Nink created this Life Tributes page to make it easy to share your memories.

Send flowers to the Nink family.