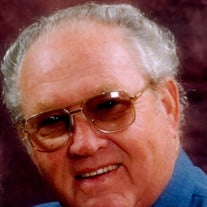 Princeton – Max Levi Coville, 92, of Princeton, IL passed away on Friday, February 1, 2019 at Heritage Manor in Walnut, IL, surrounded by his family. Max was born in Dover, Illinois to the late John and Helen (Swanson) Coville on October 11, 1926. Max attended Walnut High School until he was drafted into the service, Feb 3, 1945. After about three weeks his camp commander asked for volunteers for the invasion of Japan. Max and his buddies signed up because they were tired of training. He was part of the “cleanup of Okinawa”. He was on Okinawa for about fourteen months, spending much of his time in charge of communications and the switchboard. Max served his country as well as his brother, and they both wrote letters home. After receiving a letter from home, his mother asked why he and his brother were sending letters from the same address. He found out that he and his brother were stationed in the same camp by a letter from his mother. The brothers were able to reconnect that same day. Coville wrote a poem called “The Boys From Okinawa!” regarding his time there, which was featured in the BCR. Once discharged November 29, 1946 he lived with his parents in Nebraska before returning to Bureau County. He married the late Dorothy Olson Coville on December 10, 1950 and worked for the City of Princeton in the Electric Department as Superintendent, retiring after 35 years. After retirement from the City of Princeton, he could be seen around Norberg Memorial Home helping out with funeral services for over twenty years. He found love again and married Babe Dewaele, on March 30, 2016. He was a member of the Kewanee Masons, American Legion and VFW, The Elks Club and the Moose Lodge not to mention the “McDonalds Morning Coffee Crew”. Max enjoyed bird whistling, hunting, baseball games and all sporting events for his children and grandchildren. He was a big Cubs fan and proudly served our country. He attended the annual Veterans Picnics at Morrison State Park and was fortunate enough to take part in the Honor Flight with the late Bill Nelson. He loved fried chicken and fishing, he was a fantastic story teller and really enjoyed spending time with family and friends. Max is survived by his wife, Babe Coville of Walnut, IL, one son, Allan (Diane) Coville of McFarland, WI; three grandchildren, Tim (Jen) Forristall of Princeton, IL, Sara (Mike) Clark of Princeton, IL, and Shawn Coville of McFarland, WI; five great grandchildren, Morgan, Tyler, Makya, Alexis, Camden; three step children; Duaine (Deb) Rote, Ronald Rote and Caryl (Mike) Dimmig; one son-in-law, Larry Forristall of Princeton, IL; As well as several step grandchildren, nieces, nephews and cousins. He is preceded in death by his parents, wife Dorothy Coville (10/7/2010), one daughter, Judy Forristall; one brother, John Coville, Jr.; one sister, Jean White; and one great granddaughter, Faith; as well as many beloved animals, especially Wags, his favorite dog. A visitation for Max will be held on Wednesday, February 6, 2019 at Norberg Memorial Home, Princeton, IL from 4:00 p.m. to 7:00 p.m. Services will be held on February 7, 2019 at 10:00 a.m. officiated by Pastor Brian Moore of the First Christian Church. Followed by a graveside service at Oakland Cemetery, Princeton, IL. In lieu of flowers memorials may be directed to The American Legion of Princeton, IL. Online condolences may be left at www.norbergfh.com Arrangements by Norberg Memorial Home, Inc.

Princeton &#8211; Max Levi Coville, 92, of Princeton, IL passed away on Friday, February 1, 2019 at Heritage Manor in Walnut, IL, surrounded by his family. Max was born in Dover, Illinois to the late John and Helen (Swanson) Coville on October... View Obituary & Service Information

The family of Max L Coville created this Life Tributes page to make it easy to share your memories.

Send flowers to the Coville family.