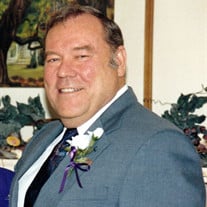 Max Thompson PRINCETON — Max Thompson, longtime educator, athletic coach/director and school administrator, died Sunday, June 4, 2017, following a lengthy illness. Max was born in 1935 in Moundville, Mo., to Arthur and Beulah Thompson. The Thompson family, along with several other Moundville families, relocated to Dover, Ill., during the late 1930's as tenant farmers. Max enjoyed athletics and played high school football for Princeton High School; he graduated from PHS in 1953. Following graduation, he entered the U.S. Navy and served on the USS Eaton cruising the Mediterranean. Returning stateside, he entered Northern Illinois University in DeKalb and graduated in 1959 with a Bachelor of Art in Social Science. During his undergraduate years he was a member of Tau Kappa Epsilon fraternity. He subsequently earned a master's degree in school administration from NIU. He spent 35 years at Grant Community High School in Fox Lake as a civics teacher, coach and athletic director, retiring as a principal/assistant superintendent. He was past president of the board of education of Richmond High School, and served for many years as a trustee of the village of Spring Grove and the Board of Directors for Y.M.C.A. Camp Duncan. Upon retiring to Princeton, he married his high school sweetheart, Carolyn "Candy" Anderson Lokay (PHS Class of 1953). Together, they enjoyed golf, traveling and re-connecting with old-time friends until her passing in 2011. Max was a member of the Princeton Moose Lodge and the Princeton B.P.O.E. He cherished his early morning breakfasts with his buddies at the "Truth Table" and will be missed for his biting wit and candor. Max was preceded in death by his parents, Art and Beulah Thompson; and his wife, Candy. He leaves behind his daughters, Lynn Glauser (Paul) of Illinois and Laura Hall (Brad) of Florida; four grandchildren, Braxton, Sydney, Cassie and Paula; a sister, Marilyn Brooks of Princeton; and two nieces and a nephew, along with two stepdaughters and a stepson. Pursuant to Max's wishes, there will be no services. The Norberg Memorial Home in Princeton assisted the family. Online condolences may be left at www.norbergfh.com.

The family of Maxson Thompson created this Life Tributes page to make it easy to share your memories.

Send flowers to the Thompson family.