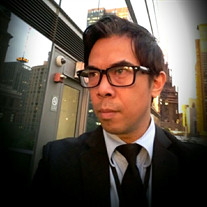 Manhattan, NY – Musician, commercial illustrator and sketch artist Melvin Ylagan 49, passed away unexpectedly on Monday, February 8, 2021 in Manhattan, NY.  He was a lover of life and his journey didn’t come to an end with his death. Melvin, lovingly referred to as Mel by family and friends was born on October 28, 1971 in the Philippines to Mariano (Magtoto) Ylagan and Salustiana (Rosal) Ylagan. Melvin along with his parents, and brother and sister came to the United States on March 26, 1984. Melvin grew up in Flushing, Queens New York and graduated from Bayside High school in 1990. He studied Illustration and Cartooning at The School of Visual Arts and graduated in Class of 1997.   He was a Former Background assistant artist at ASH - Event Comics 1995 – 1998, Artist/Colorist at Continuity Studios 1998 New York, New York, Illustrated/ colored animatic and storyboard frames for Commercials and advertisements, a Former illustrator at the STUDIO NYC 2000 – 2005, Illustrated Storyboards and Animatics for Tv commercials. He was a former Commercial Illustrator/ Sketch Artist at H4B Chelsea New York, New York. He also taught Human Anatomy, humor in caricature at Joe Kubert School of Cartoon and Graphic Art, Inc. in 2009.    Mel was also a very talented singer/song-writer. His style of music varried from Metal, Industrial, Gothic, and Synthpop.  He was a huge fan of the late John Lennon, and always felt his music deserved much more recognition.    He is survived by his Mother Luz Ylagan of Princeton, Illinois and two siblings Lourdes Ylagan of California, and Marlo Ylagan of Princeton, Illinois; as well as his aunt Amy Nyman of Princeton, IL.      He was preceded in death by his father Mariano Ylagan.   A mass will be held on Tuesday, March 2, 2021 at St. Louis Catholic Church in Princeton, IL at 10:00 a.m. officiated by Father Timothy Hepner, followed by graveside services at Oakland Cemetery. Online condolences and memorials may be left at www.norbergfh.com Arrangements by Norberg Memorial Home, Inc. & Monuments.

Manhattan, NY &#8211; Musician, commercial illustrator and sketch artist Melvin Ylagan 49, passed away unexpectedly on Monday, February 8, 2021 in Manhattan, NY.  He was a lover of life and his journey didn&#8217;t come to an end with his death. Melvin,... View Obituary & Service Information

The family of Melvin Ylagan created this Life Tributes page to make it easy to share your memories.

Send flowers to the Ylagan family.