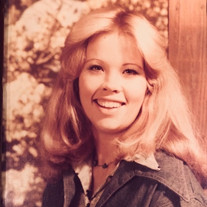 Princeton - Nancy Kay Middleton, 64, long time resident of Princeton, Illinois passed away on Thursday, March 14th, 2019, at her home. She was the daughter of Marian and Mickey Middleton. Nancy grew up on Peru Street in Princeton, a thriving neighborhood of young families connected to Downey Drive. From backyard tag and baseball to weekends on Bureau Creek with family and friends, there was rarely a dull moment. Nancy attended Princeton High School (PHS) as did her father, Mickey Middleton, daughter, Jessica, sister, Deb. Nancy was very involved with the theatre department, and attended Girls State. She graduated from PHS Class of 1973, and then attended Drake University graduating with a Bachelor's Degree in Journalism in 1977. During her college years, she was a member of Delta Zeta sorority and Guide Ons, a color guard unit which marched during football games at Drake University. She also participated in several plays during the Homestead Festival and enjoyed attending plays in Chicago. In the early 1980’s, she helped with the formation of Freedom House, a women’s shelter in Princeton, Illinois. Nancy’s career was in Chicago and Princeton, Illinois where she was a paralegal and a Registered Stockbroker from 1980 to 1998. Nancy worked with her Mom and Dad in the stock business (1980– 1993) and always gained enjoyment from studying the stock market. Nancy was voted Woman of the Year in Princeton during the 1990’s for her business intelligence and skills, and she wrote on the importance and love of being the mother of Jessica Lee Ruen, her young daughter. Her career was long and successful. Her favorite sport was horseback riding, and this love of riding began in the back yard where the Middleton family had ponies. They had a famous neighborhood pony named Old Bill, who was famous simply because anyone could ride old Bill, he moved very slowly! Nancy‘s favorite horse was My Jaunty King William (Willie), a beautiful chestnut thoroughbred, and her favorite riding area was Hidden Valley Farms. Her sister Deb would ride on her favorite Arabian horse, Ringo Ben Ali. Those cherished memories were a favorite time period of adolescence. The stable was a place where many friendships were forged and horseshows attended. The Middleton family enjoyed so many fun days with the many families of Hidden Valley Farms, and it remained a favorite topic of conversation for years to come. Nancy’s command of horses and her ability to ride were superb. She won many prizes for Saddle Seat Equitation, and she loved riding during the early years of life, through high school. She commanded her horse Willie with gentleness, and loved working and spending time with her horse. Nancy loved to travel and her family traveled every year, some of the highlights were Boston and the eastern seaboard, skiing in Vail, Colorado, visiting Florida many times for parks and beach time, Southern California, Nevada, and short trips to Wisconsin sightseeing. The emphasis was on learning and enjoyment. Later in life Nancy lived and worked in Vancouver, Canada with her daughter, Jessica. She married Vernon Wayne Ruen on October 20th, 1983, at United Methodist Church, Princeton, Illinois. Their enjoyment of literature, White Sox games and fishing trips in Canada was passed to their daughter Jessica. Both parents enjoyed spending time with their daughter Jessica Lee Ruen, born in 1985. Their marriage ended, but after some time their friendship returned and Wayne introduced Nancy to her current church, First Christian Church of Princeton, Illinois. Nancy has been a member of First Christian Church for three years and she found a welcoming home at the First Christian Church. Pastor Laura Mahn visited Nancy at her home many times during these three years. The highlight of Nancy’s life was having their daughter Jessica, the first grandchild of Marian and Mickey. Nancy loved raising Jessica! Nancy and Wayne shared the love of raising Jessica. Nancy loved hosting birthday parties, and loved finding the perfect gift for Jessica. Nancy enjoyed showing Jessica many places and instilled the love of animals, nature, and the ocean in her. Nancy and Wayne were very pleased as Jessica became an excellent student, and were thrilled as she grew academically. Nancy and Wayne remained lifelong friends, and spoke with each other frequently after divorce. Nancy’s favorite holiday was Christmas, the joy of the season, and finding the perfect gift for Jessica and family members. Marian and Mickey enjoyed creating a festive and welcoming Christmas day, and this spirit of Christmas lived on in their family. Nancy was a kind and loving daughter, sister, and mother. Nancy is survived by her mother, Marian Middleton; one daughter, Jessica Lee Ruen, James Sidell (Jessica life partner), one sister, Deb Middleton Dickinson; brother in law, Tom Dickinson, and five nephews, Davis, Seth, Ford, Cooper and Lee. Nancy was the Godmother to Ford Dickinson. Preceded in death by, father Mickey Middleton, brother Henry Middleton, grandparents Edna and Carl Nelson, Myrtle and Henry Middleton. In lieu of flowers, memorials may be directed to Freedom House, Princeton, Illinois, and First Christian Church of Princeton, Illinois. A visitation will be held on Saturday, March 30, 2019 at First Christian Church, Princeton, Illinois, from 10:00 am to 12:00pm. Services for Nancy will follow at First Christian Church, Princeton, IL, Saturday, March 30, 2019 at 12:00 pm officiated by Pastor Laura Evans Mahn of First Christian Church, Princeton, Illinois followed by a graveside service at Oakland Cemetery, Princeton, Illinois. On line condolences may be left at www.norbergfh.com Arrangements by Norberg Memorial Home, Princeton, Illinois.

Princeton - Nancy Kay Middleton, 64, long time resident of Princeton, Illinois passed away on Thursday, March 14th, 2019, at her home. She was the daughter of Marian and Mickey Middleton. Nancy grew up on Peru Street in Princeton, a thriving... View Obituary & Service Information

The family of Nancy Kay Middleton created this Life Tributes page to make it easy to share your memories.

Send flowers to the Middleton family.