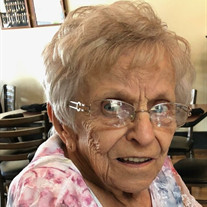 Princeton - Nellie Louise (Austin) Nyman passed away on Friday, March 1, 2019 at home surrounded by family. Nell was born on February 28, 1928 in Milo Township, Bureau County, Illinois to Walter and Lillian (Duffield) Austin. She married Gilbert P. Nyman on January 27, 1951 in Tiskilwa, IL. He preceded her in death in June, 1989. She graduated with the Class of 1946, from Bradford High School, Bradford, Illinois. She was the manager of the C.V. Field Home for Men in Princeton in the 1960's, where she would oversee the daily care of the residents. When the C.V. Field Home merged with the Prouty Home for Women to become what is known as Greenfield Retirement Home today, she became a private care giver in her home for over 30 years. After retiring from being a private care giver she worked for 10 years as a sales person at Princeton Furniture. Nell enjoyed many things thru the years. She loved riding her lawnmower to take care of her yard. Enjoyed growing tomatoes and sharing her crop with others. She grew strawberries and rhubarb turning each into delicious pies. Putting flowers in her flowers boxes and sitting on her front porch. Nell enjoyed road trips to visit her grandchildren and great grandchildren. She was a Cubs fan, a Bears fan and Bulls fan. Watching as many games on tv as she could. You could always count on her striking up a conversation with strangers wherever she went. She was a 4H leader for The Merry Maidens 4H Club teaching her daughters and others how to sew. She became a member of the local Garden Club and entered the rose contest winning the Grand Prize as a novice. She enjoyed doing genealogy research on the Duffield, Austin and Nyman family which led to membership in Daughters of the American Revolution. Nell volunteered for the Bureau County Genealogy Society indexing grave sites in local cemeteries. She was active in the Women's Club, Home Bureau and The Bureau County Genealogy Society thru the years. She was also a Life Member of the Bureau County Historical Society. Nell previously volunteered at The Closet on Wednesday afternoons and was a member of The First United Methodist Church in Princeton, IL. Nell is survived by five daughters, Vicki Thimens (Dennis Pobanz) of Colorado Springs, CO, Becky (Dennis) Guither of Princeton, IL, Heidi (Steven) Hansen of Princeton, IL, Lisa Nyman of Pecatonica, IL, Darcy (Randy) Staton of Springfield, IL; One brother Jim Austin of Lincoln, IL; one sister Martha Montgomery of Apple Valley, CA; One sister- in- law, Sue Austin of Princeton, IL; One stepdaughter Marilyn (Chuck) Pruitt of Chillicothe, IL; one stepson, John G. (Jan) Nyman of Lambertville, MI; Twelve grandchildren, Jennifer (Tony) Gawenda of Lisle, IL, Skyler Thimens of Fort Collins, CO, Todd Thimens of Colorado Springs, CO, Raquel (Jim) Williams, Marcy (Ben) Dzurisin, Brock (Charmaine) Hansen, Amanda Cox, Malissa Irizarry (Skee Hartmann) all of Princeton, IL, Jared (Krystal) Waugamon of Pecatonica, IL, Alex (Kaylee) Staton of Greenville, IL, Austin Staton and Allyson Staton of Springfield, IL; nineteen great grandchildren with a new one expected in the fall; as well as several step-grandchildren, nieces, nephews and cousins. She is preceded in death by her parents, her husband, Gilbert P Nyman; one daughter, Jill Provance Cattani; one grandson Eric Scott Provance; two sisters, Harriet Renner and Alice Merdian; One brother, Charles Austin; one niece, Charlotte Gibson; one sister-in-law, Ruth Austin; one brother-in-law, Robert Montgomery. A visitation will be held on Friday, March 8, 2019 from 9 a.m. to 10 a.m. at Norberg Memorial Home, Inc. Princeton, IL. Funeral services will be on Friday March 8, 2019, at Norberg Memorial Home, Inc., at 10:00 a.m., Officiated by Dr. Rev. Brian Gilbert and Pastor Colleen Lawrence. A graveside service will be held at the Henry Cemetery, Henry, IL on Friday, March 8, 2019 at 1:30 p.m., officiated by Pastor Colleen Lawrence. Arrangements by Norberg Memorial Home, Princeton, IL. Online condolences may be left at www.norbergfh.com Memorials may be directed to The Bureau County Genealogy Society or the American Kidney Foundation.

The family of Nellie Louise Nyman created this Life Tributes page to make it easy to share your memories.

Send flowers to the Nyman family.