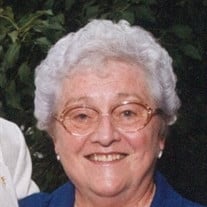 Norma Jean Pearson, 89, of Malden died Tuesday, December 29, 2020, at Liberty Village in Princeton, IL. Born April 2, 1931 in Princeton to Harry and Minnie (Husser) Fiste, she married her high school sweetheart, Glenn Pearson, on September 30, 1951 at St. John Lutheran Church, Princeton, IL. She graduated from Malden High School in 1949. She was a farm wife and worked part-time in various secretarial and retail positions. She was a lifelong member of St. John Lutheran Church, “Church on the Hill”, Princeton, IL, where she served as organist for over 50 years. She loved to travel, spend time with family and friends, shop for a great bargain, and vacation in the Ozarks. She spent many hours riding in the boat as “spotter” for young water skiers. Norma Jean was a devoted wife, mother and grandmother. She served her community through numerous organizations such as Women’s Club, church council and WELCA. Norma and Glenn also delivered Mobile Meals in Princeton for several years. She enjoyed attending local church, school and community concerts and passed along her love for music by teaching private piano lessons for several years. She was quick to bring a meal to a neighbor in need and was known for her delicious ravioli and creamed chicken at church potluck dinners or holiday gatherings. She is survived by three sons, Larry (Pat) Pearson of rural Arlington, Randy (Robin) Pearson of Towanda, Gregg (Kaye) Pearson of Princeton; one brother Dale (Barb) Fiste of rural Malden; seven grandchildren Matthew (Amanda) Pearson, J. Michael Pearson, Marc Pearson, Paul Pearson, Stacy (Matt) Sink, Bradley (Christine) Pearson, Jaimie (Jeremy) Munson; and six great-grandchildren. She was preceded in death by her parents, husband, sister (Marlene), and an infant son. A private burial service will be held for the immediate family. In lieu of flowers, memorials may be directed to the family or St. John Lutheran Church, Princeton IL. To honor her love of music, a scholarship will be granted to an individual who is pursuing a career as an organist. Online memorials and condolences may be left at www.norbergfh.com Arrangements by Norberg Memorial Home, Inc. & Monuments.

The family of Norma J Pearson created this Life Tributes page to make it easy to share your memories.

Send flowers to the Pearson family.