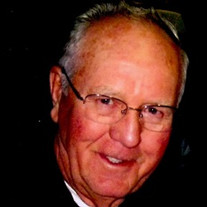 Princeton - Oscar E. Duffield "Duffy" passed away on September 23, 2018 at OSF in Peoria, IL surrounded by his family. Duffy was born on August 30, 1928 in Depue, IL to Oscar and Viola (Moore) Duffield. He was a graduate of Depue High School in 1946. He married the love of his life, Joan Christensen on February 5, 1949. He was enlisted in the United States Army after graduating high school and was honorably discharged in 1948. He was a member of the Masons and worked at Ingredion of Pekin, IL formally known as Corn Products until retirement when Joanie and Duffy went to Sebring, Florida to enjoy some sunshine down south. When they returned they moved to Morton, IL. Duffy would drive cars with his friend Roger to auction at a local car dealership. Duffy enjoyed fishing and camping at Kentuckiana Camp Grounds in Mackinaw, IL where they were regulars at the Saturday evening entertainment show. Many friendships were made there. Duffy had many nieces and nephews that he "adopted" as his own. He would spoil each and every one of them. His family and his wife were the most important things in the world to him. He also loved animals. He was known as the "park dog walker" where ever he went. He would walk the dogs in his trailer park daily. He was an inspiration to all that knew him and his kind heart and generosity of love with be missed by so many. Duffy is survived by his loving wife of 69 yrs Joanie, two sisters Cheryle (Eugene) Owens of Princeton and Jeanie (James) Saal of Tennessee as well as many nieces and nephews. He was preceded in death by his parents, three brothers; Lawrence, Glenn and George, two sisters; Lily Mae Bucklex and Violet Koonce. A private graveside service will be held at a later date and time.

Princeton - Oscar E. Duffield "Duffy" passed away on September 23, 2018 at OSF in Peoria, IL surrounded by his family. Duffy was born on August 30, 1928 in Depue, IL to Oscar and Viola (Moore) Duffield. He was a graduate of Depue High School... View Obituary & Service Information

The family of Oscar Earnest Duffield created this Life Tributes page to make it easy to share your memories.

Send flowers to the Duffield family.