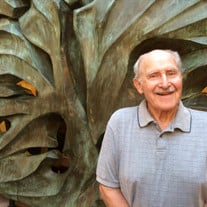 Princeton – Owen Vernon Shaffer, Jr., 93, of Princeton, IL, passed away on Tuesday, February 16, 2021, at Liberty Village in Princeton, IL. Verne, as he was known, was born on January 26, 1928, to the late Owen and Ina Mae (Rhodes) Shaffer in Princeton, IL. He graduated from Princeton High School in 1946 and received his Bachelor’s degree from Beloit College in 1950. He married Bernice Elsa Mutimer on June 23, 1951. They had two children, Cary and Owen. Verne worked as an art professor at Olivet College in Olivet, MI, in the early 1950’s while earning his Master’s degree from Michigan State University. He then worked as an art professor and the Director of the Wright Art Center at Beloit College in the mid to late 1950’s. From 1961 – 2015 he worked as a self-employed sculptor creating mostly large outdoor public pieces. Verne was the cofounder of the Art League in Beloit, WI, and was also a member of the Wisconsin Arts Council, and the Experimental Aircraft Association. In his lifetime Verne received many awards. In 1970 he received the Wisconsin Governor’s Award in the Arts. He also was recognized with a Distinguished Service Citation and the Alumni Award from Beloit College. In 2014 Verne received a Certificate of Recognition from Governor Scott Walker of WI, in recognition of his body of work, noting that he has more public pieces of sculpture in the state of Wisconsin that any other artist. Verne also received a Lifetime Achievement Award from the Prairie Arts Council, Princeton, IL, and a Lifetime Achievement Award from The Arts of Starved Rock Country. Verne enjoyed working in the yard, skiing, canoeing, camping, traveling around the United States, and piloting his own plane. His love of nature and the outdoors are evident in many of his pieces of sculpture. He actively produced sculpture well into his 80s. Verne loved spending time with his family and was a dedicated father and grandfather. Verne is survived by his two children, Cary Shaffer (Harold) Tuckey and Owen Raymond (Rob) Shaffer, granddaughter Emily Schoeb, great granddaughter Amelia Storey, dear companion Carolyn Workman, and many nieces and nephews. Verne was preceded in death by his parents, an infant daughter, Theresa Ann Shaffer, sisters Mary Lucy Nelson and Ina Maybeth Martin, one brother Jerome Shaffer, and his former wife, Bernice Shaffer. In lieu of flowers, memorials may be directed to the O.V. Shaffer Endowed Exhibitions Fund at Beloit College, Box 45, 700 College Street, Beloit, WI, 53511 in Verne’s name. Verne’s ashes will be interred at St. Paul’s Episcopal Church in Beloit, WI. A celebration of life will be held at a later date. Online memorials and condolences may be left at www.norbergfh.com Arrangements by Norberg Memorial Home, Inc. & Monuments.

The family of Owen V Shaffer, Jr. created this Life Tributes page to make it easy to share your memories.

Send flowers to the Shaffer family.