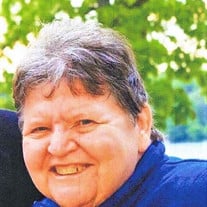 Wyanet - Patricia Ann "Pat" Mark, 74, of Bangor, PA passed away on Thursday, June 6, 2019, surrounded by her loving family. Patricia was born in Manlius, IL on October 18, 1944, a daughter of the late Lester and Hazel (Staples) Smith. She was the wife of Derrold G. Mark. They celebrated their 55th wedding anniversary this month. Pat was a graduate of Wyanet High School in Wyanet, IL. She was employed as a CNA for the Alzheimer's Association in Hawaii until retiring. She was a member of the Flemington Elks Auxiliary. Pat enjoyed being a home health caretaker and she enjoyed knitting, baking, and cooking. She was of the Catholic faith. In addition to her husband, Derrold, Pat is survived by two daughters, DeAnn Woolf, wife of Richard Woolf of Bangor, PA, and Christine Woolf, of Philipsburg, NJ; four sons Glenn Mark, husband of Gayle of Stafford, VA; Steven Mark, of Stafford, VA; Gregg Mark, husband of Sharon, of Foley, MN; and Chad Mark, husband of Brittany of Coral Springs, FL; a sister, Anita Reed, of Wyanet, IL.; a brother, Randy Smith, of Stafford, VA., 18 grandchildren, and 9 great-grandchildren. She was preceded in death her parents, one sister, JoAnn (Smith) Dever; one brother Richard Smith. Local services were held in Pennsylvania at the Gaffney Parsons Funeral Home & Cremation Services, Inc. Bangor, PA. www.gaffneyparsons.com A visitation for Pat will be held at Norberg Memorial Home, Inc in Princeton, IL on Wednesday, June 12, 2019 from 5:00 p.m. to 7:00 p.m. A graveside service will be held at Elm Lawn Cemetery in Princeton, IL at 10:00 a.m., on Thursday, June 13, 2019, officiated by Deacon John Murphy. Arrangements by Norberg Memorial Home, Inc. Princeton, IL Online condolences may be left at www.norbergfh.com

Wyanet - Patricia Ann "Pat" Mark, 74, of Bangor, PA passed away on Thursday, June 6, 2019, surrounded by her loving family. Patricia was born in Manlius, IL on October 18, 1944, a daughter of the late Lester and Hazel (Staples) Smith. She... View Obituary & Service Information

The family of Patricia Mark created this Life Tributes page to make it easy to share your memories.

Send flowers to the Mark family.