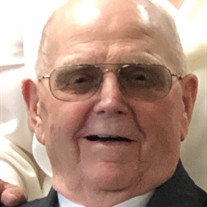 Tiskilwa – Paul Michael Geiger, 87 of Tiskilwa, IL passed away on Wednesday, January 8, 2019 at Perry Memorial Hospital surrounded by loved ones. Paul also known as Grumps by family, friends and loved ones was born on September 19, 1932 to the late Michael and Amelia (Lang) Geiger in Dorchester, WI. After high school he joined the military and served in the United States Army from 1953 to 1955. He met the love of his life Patricia Copeland at Lake Michigan one afternoon, they married that same year, November 24, 1955 on Thanksgiving Day at St. Louis Catholic Church in Dorchester, WI. He began his work career at Allen Bradley Manufacturing. He also worked at C&H Air Compressors in Milwaukee, WI. He moved to Princeton when he received a job offer at Champion. Once the children had grown, he and his bride moved to West Virginia where he worked at Steel Fabricators and Pat worked as a secretary in the office, until he semiretired in 1990. They then moved back to Wisconsin where he opened his own company, Grumps Air Supply in St. Germaine, WI until he retired at the young age of 82. Once retired they returned to the area and lived in Tiskilwa. He was a member of the Apple Dumpling Snowmobile Group, (where he had so many great memories for himself and family), the Princeton Moose Lodge and St. Louis Catholic Church of Princeton and St. Mary’s Catholic Church in Tiskilwa. Paul loved to work, he was one of the hardest working people his family had ever known. In his spare time he loved to do woodworking, fishing, golf and hunting. Even in retirement he founds ways to work, he would repair golf clubs on the side. He loved gardening and enjoyed watching sports, football, basketball, golf and Nascar. He was a lifelong Green Bay Packers fan, go pack go! He loved to snowmobile, water ski, boating anything to do with the outdoors. His best times were spent with his wife, children and grandchildren. They will always remember him as a hardworking, fun loving man who loved life and taught them to do the same. He is survived by his bride of 64 years, Patricia (Copeland) Geiger of Tiskilwa, IL; six children, Joan Hass of Princeton, IL, Douglas (Suzy) Geiger of Milwaukee, WI, Diane (Jim) Crumbley of Stockbridge, GA, Beverly (Karl) Pfleger of Tiskilwa, IL, Robert (Paula) Geiger of Orlando, FL and Michele (Eric) Geiger of Green Bay, WI; eight grandchildren, Trevor, Tyler, Shelby, Sydney, Amanda, Jim, Brandon and Emily; four great grandchildren, Ryan, Elijah, Stella and Tate; two sisters, Therese Geiger and Jane Austin; three brothers, David Geiger, Mark Geiger and Cyril Geiger; as well as numerous aunts, uncles, nieces, nephews and cousins. Paul is preceded in death by his parents, Michael and Amelia Geiger, one brother Norbert Geiger and one sister, Margaret Piessig. A visitation for Paul will be held on Monday, January 13, 2020 at St. Louis Catholic Church, Princeton, IL from 9:00 a.m. to 11:00 a.m. Services for Paul will be on Monday, January 13, 2020 at St. Louis Catholic Church, Princeton, IL at 11:00 a.m. officiated by Deacon John Murphy. Followed by military rites. Cremation rites accorded. In lieu of flowers, memorials may be directed to the Tiskilwa Ambulance Service. Online condolences may be left at www.norbergfh.com Arrangements by Norberg Memorial Home, Inc. & Monuments.

Tiskilwa &#8211; Paul Michael Geiger, 87 of Tiskilwa, IL passed away on Wednesday, January 8, 2019 at Perry Memorial Hospital surrounded by loved ones. Paul also known as Grumps by family, friends and loved ones was born on September 19,... View Obituary & Service Information

The family of Paul M Geiger created this Life Tributes page to make it easy to share your memories.

Send flowers to the Geiger family.