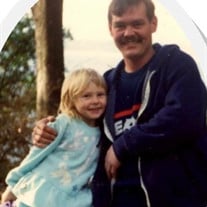 Princeton – Paul W. Swanlund, 60, of Wyanet, IL, passed away on Wednesday, June 12, 2019 at Aperion Care, Princeton, IL, surrounded by loved ones. Paul was born in Princeton, IL on April 13, 1959 to Richard and Shirley (Morris) Swanlund. He attended Morton High School in Cicero, IL. He worked for various farmers in the area, including family and friends. He also worked at R.P. Lumber formerly Allen Lumber in Princeton, IL, before moving to Seattle, Washington and becoming an auto mechanic. He moved back to Princeton in 1994 to be closer to family, his pride and joy, Cristy, his daughter, whom he adored. He married Kathleen Simac, February 8, 1992 at the Lutheran Church in Seattle, Washington. He enjoyed anything to do with trains, from watching them, to building models of them, to drawing them, he was a true train enthusiast. He was a big NASCAR fan and attending events from the funny car events to the Daytona 500. He had so many favorite drivers, it was hard to pick just one. Paul choose to love them all. He enjoyed tinkering with his model hot rods, storm chasing and loved music from the 60’s and 70’s. His most favorite activity was watching his daughter and grandbabies grow up and spending time with his wife of 27 years, Kathleen. Paul is survived by, his wife, Kathleen Swanlund of Wyanet, IL; his mother, Shirley Marsh of Princeton, IL; one daughter, Cristy Benavides and her fiancé Andrew Hoffman of Princeton, IL; two grandchildren, Caden and Maci of Princeton; one brother, Dan Swanlund of Malden, IL; along with his favorite cat Jethro; numerous aunt, uncles, nieces, nephews and cousins. He is preceded in death by his father, Richard Swanlund; his grandparents, Bob and Helen Aaron, Elburn and Darlene Swanlund. In lieu of flowers, memorials may be directed to the family. A memorial service will be held on Saturday, June 22, 2019 at Norberg Memorial Home, Inc. in Princeton, IL from 2:00 p.m. to 4:00 p.m. Arrangements by Norberg Memorial Home, Inc., Princeton, IL. Online condolences may be left at www.norbergfh.com

The family of Paul William Swanlund created this Life Tributes page to make it easy to share your memories.

Send flowers to the Swanlund family.