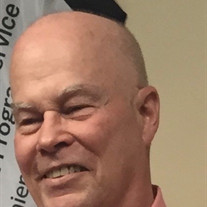 Princeton - Ralph H. Rausch, formerly of Coloma, Mi., passed away on Sunday, November 1, 2020, at Aperion Care in Princeton. Ralph was born on August 3, 1950, in Munich, Germany, the son of a lifelong military man, Ralph Rausch, and Mary Frances (Graff) Rausch. He held two bachelor’s degrees, one in History and one in Psychology from Southern Illinois University. He married Lynne Anderson of Princeton on May 25, 2003, at the First United Methodist Church in St Joseph, Michigan, after which time they resided in Michigan. After leaving his position as a Department Director at Gateway Services in Princeton he took a position as Project Director for AARP’s Senior Community Employment Program in Southwest Michigan, retiring in 2015. Ralph was a World War II enthusiast, a subject he was incredibly knowledgeable about. He enjoyed watching the History Channel, National Geographic and PBS. He loved to travel; and his childhood, job, and life took him many places and enabled him to see nearly every state in the United States. He enjoyed the challenge of putting together models of military sea and aircraft. Spending time with family was his first love, and in December 2019 he moved with his wife back to Princeton in order to be near children and grandchildren. Ralph is survived by his wife, Lynne, of 17 years; his children, Mary Rausch of Springfield, Illinois, Sarah (Dan) Tucker of Monument, Colorado, Jacob Rausch of Utica, Illinois, Laurel (Steve) Ciesielski of Princeton, Illinois, and Daniel (Heidi) Anderson of Princeton; ten grandchildren; one sister, Jacqueline (James) Carrow of La Salle, Illinois. He was preceded in death by his parents and two children in infancy. In lieu of flowers, donations may be made to the Leukemia and Lymphoma Society, Friends of Strays, Princeton, Illinois, or Gateway Services, Princeton, Illinois. Private graveside services will be held for family only. Online condolences and memorials may be directed to www.norbergfh.com Arrangements by Norberg Memorial Home & Monuments.

The family of Ralph H Rausch created this Life Tributes page to make it easy to share your memories.

Send flowers to the Rausch family.