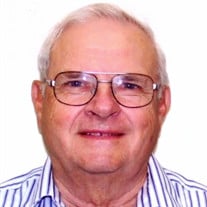 Princeton – Ralph William (Bill) Anson of Princeton, Illinois left this earth on Wednesday, July 31, 2019 at Liberty Village in Princeton, surrounded by his loving family. Bill was born on June 4, 1930 in Princeton, IL to Ralph and Dorothy (Bowen) Anson and raised with his siblings, Marjorie, Carol and Richard on a farm in Dover, IL. Bill attended grade school at a one-room school house called Hazel Grove in Dover and went on to graduate from Princeton High School and earned a business degree from Western Illinois University. He worked at the National T grocery store in high school and A&P during college. After college graduation, he started his 43 year career with Ag-View FS. He then went on to start a new 20 year career with the USDA doing Ag surveys. A family man first and foremost he was dedicated to his family and their well-being. He loved his work and the people with whom he worked. He took pleasure in the success of others and enjoyed putting together a difficult project. His best meetings were conducted over a productive lunch. Best of all was the satisfaction of his endeavors finishing on time and on budget. Bill loved planting a garden and sharing his produce with his family and friends. He was an avid fisherman who loved to have fish fries with his buddies. Bill would share whatever he had except the location of his best fishing spots or what he used to catch the big ones. He married Patricia Ann Bomleny on July 1, 1951. They had three children, Michael Anson, John (Terri Gray) Anson and Michele (Stephen) Matthews. They had four grandchildren, Sarah (Tyson) McComber, Shea (Gallen Hunter) Anson, Rachel Anson-Barnett and Joshua (Heather) Bettridge and three great grandchildren, Sasha Kusmierz, Major and Hunter Bettridge. Bill was preceded in death by his parents, Ralph and Dorothy Anson, one son Michael Anson and two siblings Marjorie Ebersole and Carol Ellberg. Memorials may be directed to the First United Methodist Church. A visitation for Bill will be held on Sunday, August 4, 2019 from 4:00 p.m. to 7:00 p.m. at Norberg Memorial Home, Inc. & Monuments in Princeton, IL. Services will be held on Monday, August 5, 2019 at 10:30 a.m. at the First United Methodist Church in Princeton, IL., officiated by Lay Minister Marcia Peddicord. A private burial service will be held at a later date and time. Online condolences may be left at www.norbergfh.com Arrangements by Norberg Memorial Home, Inc & Monuments. Princeton, IL.

Princeton &#8211; Ralph William (Bill) Anson of Princeton, Illinois left this earth on Wednesday, July 31, 2019 at Liberty Village in Princeton, surrounded by his loving family. Bill was born on June 4, 1930 in Princeton, IL to Ralph and... View Obituary & Service Information

The family of Ralph "Bill" William Anson created this Life Tributes page to make it easy to share your memories.

Send flowers to the Anson family.