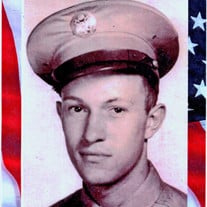 Princeton – Raymond E. McCall, 94, of Princeton, IL passed away on Sunday, June 9th at Aperion Care in Princeton peacefully, surrounded by his loving family. Raymond was born on September 25, 1924 to the late Elmer and Martha (Wirges) McCall in Princeton, IL. He met his bride to be, Laura Zimmerman, when he was five years old at the Kasbeer Community Church during Sunday school class. They married on December 27, 1944. She was the love of his life and he was the love of hers. When they were asked what the secret to a long, happy marriage was, Laura replied, “to always say I love you and to stay in love” and Raymond replied “to always say, Yes Dear.” They were married almost 75 years and even shared a room at Aperion Care, still taking care of one another and saying “I love you” every day. Shortly after marrying Laura, Raymond was deployed to France. He was a decorated World War II Veteran, serving with the Third Division in France. He was wounded in the battle for the Colmar Pocket in early 1945. Raymond was awarded the Purple Heart, the Bronze Star and the French Croix-de-guerre, and was very proud of his service to his country. He participated in an Honor Flight to Washington, DC in 2010, to visit the WWII Memorial as well as other military memorials. After several months of recuperation from his military injury, Raymond was a fireman in Dixon, IL., a truck driver in Ohio, IL., before taking a job at the Van Orin Farmers Elevator, where after a couple of years he became the manager of the elevator. He worked in that capacity for over 30 years until he retired. Raymond was an active lifelong member of the Kasbeer Community Church where he served his church in several positions, he was a member of the Princeton American Legion as well as the VFW. He really enjoyed playing games with his children, grandchildren and friends. He loved to golf with his bride as often as they were able, and were members at Wyaton Hills, Princeton, IL. and Indian Hills, Tiskilwa, IL. He loved his God, his Country and his family and was an amazing husband, father, grandfather and friend. He is survived by his loving wife and partner for almost 75 years, Laura (Zimmerman) McCall; two sons, Donald (Lea) McCall of Peoria, IL and Steven (Judy) McCall of Princeton, IL; one daughter, Lynn Hoffman of Princeton, IL; six grandchildren; fourteen great-grandchildren; and four great-great-grandchildren. Raymond is preceded in death by his parents and one sister, Dorothy Bohm. A visitation will be held at Norberg Memorial Home, Princeton, IL., on Friday, June 21, 2019 from 10:30 a.m. to 12:00 p.m. Services for Raymond will be Friday, June 21, 2019 at 12:00 p.m., at Norberg Memorial Home, Princeton, IL. Officiated by Reverend Eric Siebert of the Kasbeer Community Church and long-time family friend, Jeff Ringenberg, Operations Manager for the Peoria Area Youth for Christ. Graveside services will follow at Elm Lawn Memorial Park, Princeton, IL. with full military rights. In lieu of flowers, memorials may be directed to the Kasbeer Community Church or Honor Flight of the Quad Cities, 4130 Northwest Blvd, Davenport, IA 52806. The family wishes to thank Aperion Care in Princeton as well as VITAS Hospice for the excellent care they gave Raymond and are still giving Laura. Arrangements by Norberg Memorial Home, Inc. Online condolences may be left at www.norbergfh.com

Princeton &#8211; Raymond E. McCall, 94, of Princeton, IL passed away on Sunday, June 9th at Aperion Care in Princeton peacefully, surrounded by his loving family. Raymond was born on September 25, 1924 to the late Elmer and Martha (Wirges)... View Obituary & Service Information

The family of Raymond E McCall created this Life Tributes page to make it easy to share your memories.

Send flowers to the McCall family.