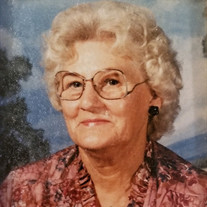 Princeton – Reatha A. Wallace, 95, passed away on Monday, January 18, 2021 at Liberty Village, in Princeton, IL. Reatha was born in Faubush, KY to the late Robert and Ottie (Gaines) Foster. She married the late Kenneth G. Wallace on July 31, 1965 in McLean, IL. She worked for Bureau County School District as a school bus driver for over 30 years. She loved to come home from work and tell her family about all the stories from the children on the bus. Prior to driving a bus, she had owned and operated two restaurants in Bell Flower, IL in the 60’s. The Dinner Bell and The Red Barn Café, known for their home cooked food, because there was no way Reatha was going to serve anyone food that wasn’t made from scratch. She also worked at General Cable in Monticello, IL for about 10 years as a line worker. She enjoyed going to church concerts with her friend Eileen Miller. They would travel around to different churches in the area, listening to the gospel concerts. They would go out to eat, enjoy a concert and go have a piece of pie or coffee after. She loved to laugh and could tell a story like a pro. She enjoyed country music, crocheting and gardening. Growing up during the great depression, she was taught many things that she passed on to her family, one being appreciation and don’t waste anything, everything has a purpose. Banana bread was just one of the grandchildren’s favorites. Reatha was so incredibly generous. She didn’t have a lot to give, but she gave what she could. Whenever having Thanksgiving, Christmas dinner, or even a Sunday meals, it didn’t matter who showed up, no one every left her home hungry. Her family was her everything, being a mother and grandmother was what was really most important to her. She will be greatly missed by all of them. She is survived by her two sons, Eddy Wittig of Deland, IL and Keith (Sherri) Wittig of Princeton, IL; seven grandchildren, Michael (Tammy) Wittig and Dylan (Daniel) Wittig, Colby Wittig, Carly Wittig, Josh Mesick, Matthew Mesick, Nathan Mesick; five great grandchildren. Preceding her in death were her parents, Robert and Ottie Foster, her husband Kenneth Wallace and four siblings, Dorothy Robinson, Anne Burton, June Brown and Paul foster. In lieu of flowers, memorials may be directed to the family. Services will be held at a later date and time with internment in the Grandview Memorial Garden, in Champaign, IL. Online condolences and memorials may be directed to www.norbergfh.com Arrangements by Norberg Memorial Home, Inc. & Monuments.

Princeton &#8211; Reatha A. Wallace, 95, passed away on Monday, January 18, 2021 at Liberty Village, in Princeton, IL. Reatha was born in Faubush, KY to the late Robert and Ottie (Gaines) Foster. She married the late Kenneth G. Wallace on... View Obituary & Service Information

The family of Reatha Audrey Wallace created this Life Tributes page to make it easy to share your memories.

Princeton – Reatha A. Wallace, 95, passed away on Monday, January...

Send flowers to the Wallace family.