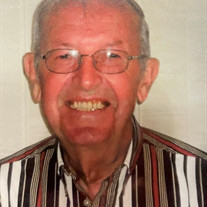 Princeton - Richard Anson, 87 of Princeton, IL passed away on Friday, March 11, 2022 at Liberty Village in Princeton, IL. Richard was born on May 14, 1934 to Ralph and Dorothy (Bowen) Anson in Princeton, IL. He was a graduate of Princeton High School Class of 1952. Upon Graduation, Richard joined the United States Army, serving in the Korean War and was honorably discharged in 1953. He attended Western Illinois University, later marrying the love of his life, Frances Gapinski on August 18, 1956 in Chicago, IL. He and Frances had four sons, all growing up on the family farm. Richard farmed his entire life. Richard enjoyed going fishing with his four sons and friends whenever time allowed. As farming the land took up most of his time. He loved spending time with his family and church community, the Dover Bible Church. In lieu of flowers, memorials may be directed to the family for charitable distribution. He is survived by his wife of 65 years, Frances Anson of Princeton, IL; three sons, Dale (Rachelle) Anson of Apple Valley, MN, Doug (Grazia) Anson of Paso Robles, CA, and Dean Anson of Spring Valley, IL; two grandchildren, Nicholas (Carly) Anson and Cori Anson; and three sister-in-law's. He is proceeded in death by his parents, Ralph and Dorothy Anson, one son David Anson, three siblings, Ralph "Bill" Anson, Carol Ellberg, Marjorie Ebersole, as well as three grandsons. A visitation for Richard will be held at Norberg Memorial Home Inc. and Monuments on Wednesday, March 16, 2022 from 10:00 a.m. to 12:00 p.m. Services for Richard will be held at Norberg Memorial Home, Inc. & Monuments on Wednesday, March 16, 2022 at 12:00 p.m. with Pastor Joe Denner Officiating. Graveside services to follow at Elm Lawn Memorial Park in Princeton, IL. Military Rites Accorded. Online memorials and condolences may be directed to www.norbergfh.com Arrangements by Norberg Memorial Home, Inc. & Monuments.

The family of Richard Anson created this Life Tributes page to make it easy to share your memories.

Princeton - Richard Anson, 87 of Princeton, IL passed away on...

Send flowers to the Anson family.