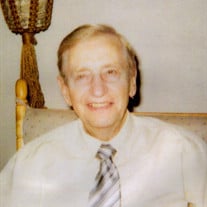 Princeton – Richard R. Hildenbrand, 92, of Princeton, IL passed away at Perry Memorial Hospital, on November 19, 2018, surrounded by loved ones. Richard was born on November 16, 1926 to the late Ernest and Olga (Johnson) Hildenbrand. He married Doris Steager on June 4, 1965 at the First Lutheran Church, Princeton, IL. Richard joined the Army only to be released a few weeks later, honorably discharged because he was considered legally blind. This was found out due to a close call with his company commander and rifle practice. He was the owner of Tiskilwa Feed Store for many years and a farmer on his land for over 50 years. He was a member of First Lutheran Church, Princeton, IL and enjoyed listening to church services on TV. He was a lifelong Chicago Cubs and Bears fan. He did not let his disability stop him from doing anything. One things that he would do, while farming, when having to cross the road, he would listen to hear how close cars were and if it was ok to drive across the street on his tractor. He cooked his own breakfast daily. He loved to dance and was a great story teller. He was a very caring person and a devout Christian who will be greatly missed. Richard is survived by his wife, Doris, four children, Ronald (Cindy) Clausen, Charles Clausen, Kathleen Drake, Gail (Rick) Stoner; nine grandchildren, Amy Drake, Angel Clausen, Benjamin Lafferty, Trina Lafferty, Anthony Mungor, Ricky Mungor, Christina Monger, Melissa Milford, Tina (Bill) Pruntry; one brother, Gale Hildenbrand as well as great grandchildren and several nieces, nephews and cousins. He is preceded in death by his parents, three children, Steven Hildenbrand, Nick Clausen and Cynthia Mungor. In lieu of flowers, memorials may be directed to the family. A Celebration of Life will be held on Saturday, January 12, 2019 at Norberg Memorial Home, Princeton, IL from 1:00 p.m. to 3:00 p.m. Online condolences may be left at www.norbergfh.com Arrangements by Norberg Memorial Home.

Princeton &#8211; Richard R. Hildenbrand, 92, of Princeton, IL passed away at Perry Memorial Hospital, on November 19, 2018, surrounded by loved ones. Richard was born on November 16, 1926 to the late Ernest and Olga (Johnson) Hildenbrand.... View Obituary & Service Information

The family of Richard R Hildenbrand created this Life Tributes page to make it easy to share your memories.

Send flowers to the Hildenbrand family.