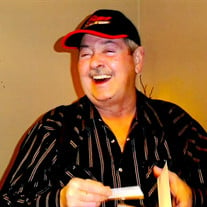 Davis Junction – Richard “Dick” Glenn Huffaker II, 70 of Davis Junction, IL passed away on Saturday, February 15, 2020 at the Swedish American Hospital surrounded by his loving family. Dick was born in Princeton, IL to the late, Richard and Doris (Rieker) Huffaker, Sr. on December 20, 1949. He graduated from Malden High School, Class of 1968. He married Chris Woodring on June 21, 1985 in Bureau County. He worked at Harper Wyman for 27 years and 2 years at Champion, then went to work at D D Express in Peru as a driver until he retired in December 2012. He was a member of the Manlius Rolle Bolle Club for 30 years, Midwest Pool League, Rochelle Conservation Club and also the Tuesday Night Rejects bowling league at Crown Lanes. He was also a member of the 1000 Man Shoot in Phoenix AZ, this was something for the NRA on 11-14-2016 when 1000 guns were fired at once, same make and model Henry Riffle. Dick loved fishing, rolle bolle, playing cards, especially Euchre with his brother. He enjoyed bean bags, video games and hunting. He was quite the apple pie baker in his family. He had cutlery skills that were unmatched and enjoyed an ice cold beer with his family and friends. He was also quite the outdoorsman. His dog Scooter was his side kick for many years and is struggling with missing his master and friend. He was an all-around great guy who will be missed by his friends and family. He is survived by his wife Chris Huffaker of Davis Junction, IL, four daughters, Shari (Bryan Williams) Richards of Peru, IL, Becky (Jeremey) Mount of Princeton, IL, Patti Huffaker-Kinney of Princeton, IL and Jenna (Richy) Humphreys of Wyanet, IL; nine grandchildren, Alexis, Hunter, Damion, Sydney, Sophia, Mariska, Gabrielle, Sawyer and Hope; one great grandchild, Elliana; one brother, Jack (Linda) Huffaker of Seatonville, IL; two sisters, Janet (Dale) Smith of Princeton, IL and Donna (Dave) Snell of Peoria, IL; one very special aunt Velma Sergeant; as well as many nieces, nephews and cousins and his first wife Jeannie Smith. Dick is preceded in death by his parents, Richard and Doris Huffaker, one half-sister, Nancy Rinebeck. In lieu of flowers, memorials may be directed to the family for charitable donation of their choice. A visitation for Dick will be held on Saturday, February 22, 2020 from 1:00 p.m. to 3:00 p.m. at Norberg Memorial Home, Inc. and Monuments. Services will follow the visitation on Saturday, February 22, 2020 at 3:00 p.m. officiated by Pastor Brian Moore. Cremation rites accorded. Arrangements by Norberg Memorial Home Inc. and Monuments. Online condolences may be left at www.norbergfh.com

The family of Richard Glenn Huffaker created this Life Tributes page to make it easy to share your memories.

Send flowers to the Huffaker family.