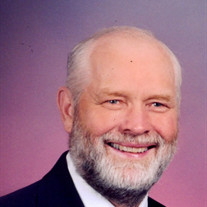 Ohio – Richard Edward Johnson, 85, of Ohio, IL passed away at MercyHealth Hospital in Rockford, IL on Thursday, August 29, 2019, surrounded by loved ones. Richard was born on December 1, 1933 to the late Edward and Bertha (Hanson) Johnson in Kewanee, IL. He was a graduate of Ohio High School in Ohio, IL, Class of 1951. He was drafted into the United States Army and proudly served his country as a Radio Operator from 1953 to 1955 when he was honorably discharged. He farmed his entire life, growing up on a farm, he eventually took over the family farm. He married his wife of 46 years Verna “Ginger” Watt on April 7, 1973 in Oak Lawn, IL. at the Church of Christ. They worked the farm together and started their family. He was a member of the First Lutheran Church in Ohio, IL, for almost 70 years. Serving many positions within the church including the Last Supper reenactment for many years. He was very active in his church. He was on the Lee County Board, Lee County Merit Board, Lee County, Farm Bureau Board, East Grove Township Supervisor for more than 30 years and the Drainage District for more than 30 years. Richard enjoyed fishing in any form, he enjoyed spear carping and his favorite fishing hole was at the Green River, a hobby he loved sharing with his son Greg and his brother Kenneth. He enjoyed watching the military channel, and anything about World War II, farming and raising livestock ranging from geese, chickens, hogs, ducks and cattle. What he loved the most was spending time with his family and working the farm. He is survived by his loving wife “Ginger” Johnson of Ohio, IL; two children, a son, Greg Johnson of Loves Park, IL and one daughter, Jennifer Johnson of Ohio, IL; four sisters-in-law, Carolyn Johnson of Walnut, IL, Arlene (Dave) Sladek of Evergreen Park, IL, Carolyn Watt of Burbank, IL. and Deb (Glenn) Holzapfel-Watt of Gurnee, IL; one brothers-in-law, Kenneth Watt of Wilmington, IL. Richard is preceded in death by his parents and one brother, Kenneth Johnson. In lieu of flowers memorials may be directed to the First Lutheran Church, Ohio, IL. A visitation for Richard will be held on Wednesday, September 18, 2019 from 1:00 p.m. to 4:00 p.m. at Norberg Memorial Home, Inc. & Monuments. Services will be on Thursday, September 19 at 10:00 a.m. at the First Lutheran Church, Ohio, IL officiated by Pastor Gene Vincent, followed by a graveside service at the Walnut Cemetery, Walnut, IL. Online condolences may be left at www.norbergfh.com Arrangements by Norberg Memorial Home, Inc. & Monuments.

Ohio &#8211; Richard Edward Johnson, 85, of Ohio, IL passed away at MercyHealth Hospital in Rockford, IL on Thursday, August 29, 2019, surrounded by loved ones. Richard was born on December 1, 1933 to the late Edward and Bertha (Hanson)... View Obituary & Service Information

The family of Richard Edward Johnson created this Life Tributes page to make it easy to share your memories.