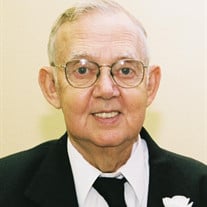 Richard Lee Kinnamon 1932-2008 Funeral service for Richard Lee Kinnamon, age 75 of Princeton, will be Friday, Jan 11, 2008 at 1:00 PM at the First Baptist Church. Brian Strom will officiate. Burial will follow in the Greenfield Cemetery, LaMoille, Military Rites will be performed by the Mendota VFW. The family will receive friends on Thursday, Jan 10, 2008 from 5:00 PM to 8:00 PM with Masonic Rites at 5:00 PM at the Norberg Memorial Home. Mr. Kinnamon, passed away at his home on Friday, January 4, 2008. The son of Irving and Velma Kinnamon he was born June 8, 1932 in Independence, IA and married Nancy Anne Steele of Mendota, IL on September 16, 1956. He was raised in Wyanet, IL where he graduated from high school in 1953. He served in the United States Army for two years as an Engineer Construction Foreman stationed in Okinawa during reconstruction after the Korean War. He began his career in service technology working for Conkey’s in Mendota, IL and retired in 1993 with 26 years of service with Minnesota Mining and Manufacturing (3M) as a Master Technician. After marrying Nancy he started his family in Mendota where he was active in First Baptist Church and Masonic Lodge. In 1975 he moved to rural Princeton to raise his family in the country. He is survived by his wife Nancy, five children: Richard (Jane) Kinnamon of Essexville, MI; Laurel Hand; Kevin (Michelle) Kinnamon; Leland Kinnamon; and Susan (Brad) Rhoads all of Princeton, IL, and thirteen grandchildren. He was preceded in death by his parents and two sisters Evelyn Baumann and Juanita Cain as well as two brothers and a sister who died in infancy. Memorials may be directed to the family for disbursment to several charities.

The family of Richard Lee Kinnamon created this Life Tributes page to make it easy to share your memories.

Send flowers to the Kinnamon family.