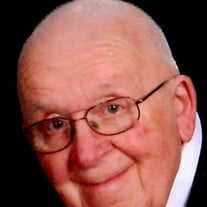 Richard Lauritzen Princeton— Richard Lee Lauritzen, 80, of Princeton passed away on March 20, 2017 at Liberty Village of Princeton. He was born Aug. 27, 1936, in Walnut to Charles and Mildred (Alshouse) Lauritzen. He attended Walnut schools, graduating with the class of 1954, many who have been together since kindergarten. Richard received a BBA degree in accounting from Northwestern University. Evening Division in Chicago in 1968. He was employed by Champion Paper Inc. in Chicago and later Hamilton Ohio then at Gibson Greeting Cards in Cincinnati, Ohio. After returning to Chicago, Richard worked for, and retired from, Hilton Hotels Corp. and in 2005 relocated to Princeton. Richard loved volunteering and in Chicago spent 11 years with Travelers and Immigrant Aid resale shop. He also spent several years with Little Brothers-Friends of the Elderly, also in Chicago. In Princeton, he volunteered 10 years in the Perry Memorial Hospital Auxiliary gift shop and several years as a Gold Coat. He also loved reading and always donated his books to the PPL book sale, and spent several years helping to set up for the annual book sale, when it was held at the fairgrounds. Another of his loves was live theater productions, especially musicals, so he spent many years as usher for Festival 56, something he looked forward to every summer. Richard was very active in the Bureau County Senior Center, where he decorated monthly bulletin boards and helped to plan contest window displays for Homestead Festival. In 2007, he was elected to the Western Illinois Area Agency on Aging's Gallery of Ageless Achievers. Richard was a member of the First United Methodist Church of Princeton. Richard is survived by one brother, Max (Carol) Lauritzen of Princeton; five nieces and nephews, David (Dianna) Lauritzen of Baltimore, Kathy (Steve) Snow) of Princeton, Kenneth (Ann) Lauritzen of Walnut, Angela (David) Bohm of Sheffield and Troy Lauritzen of Princeton; and four half nieces and half nephews, Eugene (Mary) Lauritzen of Wisconsin, Roger (Diane) Lauritzen of Rockford, Glen (Deb) Lauritzen of Peoria and Gloria Krieger of Ohio, Ill. He was preceded in death by his parents, Mildred and Charles; and a half brother, Edward Lauritzen. Services will be at 11 a.m. Monday, March 27, at the Norberg Memorial Home in Princeton with the Rev. Brian Gilbert of the First United Methodist Church in Princeton officiating. Cremation was accorded. Inurnment will be in the Walnut Cemetery. Visitation will be held prior to the services, from 10 to 11 a.m., at the funeral home. In lieu of flowers, donations may be made to the Bureau County Senior Center, Our Table at the First United Methodist Church or to the charity of the donor’s choice. Online condolences and tributes may be left at norbergfh.com

Richard Lauritzen Princeton&#8212; Richard Lee Lauritzen, 80, of Princeton passed away on March 20, 2017 at Liberty Village of Princeton. He was born Aug. 27, 1936, in Walnut to Charles and Mildred (Alshouse) Lauritzen. He attended... View Obituary & Service Information

The family of Richard Lauritzen created this Life Tributes page to make it easy to share your memories.

Send flowers to the Lauritzen family.