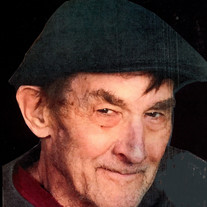 Princeton - Richard Leslie Milliron, 75, of Princeton, Illinois passed away at his home surrounded by his loving family on Sunday, July 11, 2021. Richard was born in Chicago, Illinois, on June 11, 1946. His parents were the late Chester and Lola (Stowers) Milliron. He attended Lane Tech High School and joined the U.S. Navy 1963-1967, serving as a Radioman in Japan and Vietnam aboard the U.S.S. Kennebec. He married Donna (Canale) Milliron on June 16, 1984. They moved to Princeton in 1989. They renewed their wedding vows while he was at Hines V.A. Hospital on May 26th 2021. Rich was a retired Union Carpenter from Local 195. With much of his work being commercial projects. He learned many of his skills as a boy from his grandfather and loved his trade. He'd work all week and still enjoy coming home and building in his shop. He'd make anything we asked for or needed. If something was difficult, he'd say "I'll make it work". He'd actually come up with solutions in his sleep, he loved the challenge. If something was broken, the kids would bring it over and say "give it to grandpa, he can fix anything". In addition to woodworking, he enjoyed playing cards (and trying to get away with a little cheating), reading, cooking (his famous Potato Salad, Armenian Salad, and Specialty), oldies music, and flipping houses. He'd end up getting the whole family involved in these projects- even the grandkids helped. But his greatest joy was his grandchildren. Rich had a giving and generous nature, and would help anyone. When it was necessary, he opened his home to family who needed to be cared for. He was a blood donor, donating over 10 gallons over his lifetime. He helped with many projects at St. Louis Catholic Church. Though his health had been declining these past few years, he actually was a survivor of 4 separate cancers. He was in the hospital the last couple months, dealing with other health issues, but wanted to come home and spend his remaining time with his family, who he so loved. When he got home he said "my wish has been granted" and he got to spend his last couple days with his cherished family by his side. He is survived by his loving wife Donna. His 3 daughters and their families, Tracy (Nathan) Headley of Buda, Kristy Wray of Wyanet, and Lauren (Danny) Mavity of Spring Valley. His 8 grandchildren, Preston Milliron (Meat Head), Myah Headley (Pea Pod), Brandon Wray (Bobble Head), Lilly Wray (Lemon Head), Emma Mavity (Gator), Addy Mavity (Cakes), Mason Headley (Lil Tax Man), and Taryn Hill (Air Head). His brother-in-law Michael Canale. Visitation at Norberg Memorial Home, 701 Thompson E. St on Thursday July 15, 2021 from 5:00p.m. - 8:00p.m. a recitation of Divine Mercy Chaplet at 7:30 p.m. at Norberg's. A Catholic Funeral Mass will be held at St. Louis Catholic Church in Princeton, IL on Friday, July 16, 2021 at 10:00am. Officiated by Monsignor James E. Kruse. Graveside to follow at Oakland Cemetery with military rites accorded. Memorials may be directed to St. Judes Childrens Hospital, or Hines V.A. Fisher House. Online memorials and condolences may be left online at www.norbergfh.com Arrangements by Norberg Memorial Home, Inc. & Monuments

Princeton - Richard Leslie Milliron, 75, of Princeton, Illinois passed away at his home surrounded by his loving family on Sunday, July 11, 2021. Richard was born in Chicago, Illinois, on June 11, 1946. His parents were the late Chester and... View Obituary & Service Information

The family of Richard L Milliron created this Life Tributes page to make it easy to share your memories.

Send flowers to the Milliron family.