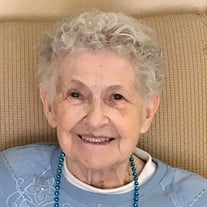 Princeton - Rita Miller, age 91, passed away peacefully at Aperion Care Princeton on Monday, May 13 at 8:45pm. Rita was born in Monessen, Pennsylvania, on September 28, 1927, the youngest of Hugh and Alice (Murphy) Smyth’s six children. She graduated from Monessen High School in 1945 and was a high school drum majorette with her sister, Patty. Rita attended the University of Pittsburgh for two years, taking accounting classes. She got her first job when she was 17 years old at Nahi Shoe Store in Pittsburgh where she was a book-keeper, because she was good with numbers, even though she really wanted to be out selling shoes with the customers. Rita met her future husband, Bill Miller, at a wedding she attended with her sister, Peggy, who was Bill’s co-worker at Alcoa. Rita and Bill were married at St. Leonard’s Church in Monessen, Pennsylvania on November 28, 1953. Their four children were all born in Pittsburgh. The family moved from Pittsburgh to Princeton, Illinois in 1967 when Bill transferred with J&L Steel. In Princeton, Rita became an avid bridge player, participating in many bridge groups, and enjoyed playing duplicate bridge. She worked at the Bureau County Republican, covering the Courthouse and news from surrounding towns, and later at First Federal Savings and Loan. She was a member of St. Louis Catholic Church. In retirement, Rita and Bill enjoyed traveling through-out the West. In 2007, Rita moved to the Greenfield Home where she lived until 2017. She began showing selections from her collection of classic movies on Friday nights and said the residents were impressed that she knew the lyrics from so many WWII-era songs. Rita enjoyed participating in the Poetry activity and could recite many poems from memory. She remained a lifelong Pittsburgh Steelers and Pittsburgh Penguins fan, cheering them on every year, always hoping for the Super Bowl trophy and Stanley Cup. In 2017, Rita moved to Aperion Care Princeton. Rita is survived by her son William (Trish) Miller and grandson Ryan, daughter Kathleen Miller, daughter Sue (Dave) Flynn and grandsons Dan, Michael, and John, and son Jay (Wendy) Miller and granddaughters Hayley and Sydney. Rita was preceded in death by her husband, Bill (2003); her sisters Nell Petrus, Peggy Smyth, and Patty Guarascio, and brothers Hugh (Buddy) and Vincent Smyth. A visitation will be held on Saturday, May 25 from 10:00am to 12:00 pm at Norberg Memorial Home, 701 East Thompson Street, Princeton, Illinois. A Mass service, officiated by Deacon John Murphy, will be held at noon also at Norberg Memorial Home. A private graveside service will follow. In lieu of flowers, memorials may be given on behalf of Rita Miller to the Disabled American Veterans. Online condolences may be left at www.norbergfh.com Arrangements by Norberg Memorial Home, Inc.

The family of Rita Elaine Miller created this Life Tributes page to make it easy to share your memories.