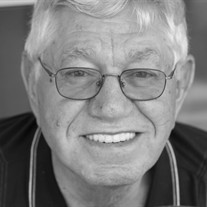 Princeton - Robert E. Bird Jr. was born on February 3, 1940, in Cleveland, Oklahoma in the County of Pawnee. He was born to Ina Mae (Gripe) Bird of Jennings, Oklahoma (August 26, 1917) and Robert Earl Bird of Salina, Kansas (June 29, 1915). He was commonly known as Bones, Bob, Bob Junior, Grandpa Bob and Uncle Bob, regardless of whether you were actually his niece or nephew. Robert attended the United Pentecostal Church of Princeton Illinois, the church his father helped found. Robert graduated Princeton High School in 1958 and attended Northern Illinois University for one year. After deciding that college was not for him, Robert moved home and helped his father on the farm. Robert learned the real estate business, and had a long career buying, selling and developing property, with a focus on the plumbing trade. He built many homes, neighborhoods and churches in Illinois, California and Texas, and playhouses in Illinois and California. He also contributed his building skills on mission trips to Germany and Croatia, and worked as a government contractor in Hungary, Bosnia and Croatia. He took pride in his work, making sure the soldering on copper pipe was neatly wiped down at the joint, with no sloppy-looking drips, even knowing the work was going to get tucked away behind layers of drywall and paint. He leaves behind his widow of 25 years, Paulette LaCasse McPhail Bird, two sons, Arthur (Gina) Bird and Robert E. Bird III, three daughters, Geri Ann (Rich) Senter, Anita (Jeff) Arnold and Jackie (Dan) Olson, two step-children Michael (Aika) McPhail and Michele (Adam) Stowers, and 12 grandchildren, Jared (Jordan) Bird, Nastasia Bird, Elise Bird, Karsyn Bird, Benjamin (Elizabeth) Senter, Austin (Tiana) Senter, Aviana Arnold, Zane Arnold, Theo Olson, Nate Olson, Violet Stowers, Alex Stowers, and several great grandchildren. He also leaves behind his step-mother Agnes Bird, three sisters, Phyllis (John) Nordstrom, Margaret Stanfield, and Linda (Dane) Lair, and one brother, Garry (Sandra) Bird, and many nieces and nephews. He was preceded in death by one sister Lora (Art) Cagle and one brother Donald Richard (Carol) Bird, as well as his father and mother. In lieu of flowers memorial may be directed to the United Pentecostal Church, Princeton, IL. A visitation will be held at Norberg Memorial Home, Inc. & Monuments on Monday, November 18, 2019 from 5:00 p.m. to 7:00 p.m. Services for Robert will be on Tuesday, November 19, 2019 at the United Pentecostal Church, Princeton, IL at 10:00 a.m. officiated by Pastor Ron Townsley and John Nordstrom Sr. Cremation rites accorded. A private burial service will be held at a later date and time. Online condolences may be left at www.norbergfh.com Arrangements by Norberg Memorial Home, Inc. & Monuments.

The family of Robert E Bird created this Life Tributes page to make it easy to share your memories.

Send flowers to the Bird family.