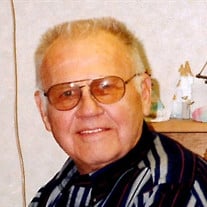 LaSalle- Robert W. Dabler, 92, of LaSalle, IL. passed away on August 12, 2017 at St. Margaret’s Hospital in Spring Valley, IL. Robert was born on May 8, 1925 in Wyanet, IL. to Earl K. and Clara (Stonewall) Dabler. He was a 1942 graduate of Wyanet High School. Robert married Caroline Kares in Manlius on September 30, 1943. He served in the United States Marine Corps in Iwo Jima and Okinawa battles. He farmed in the Manlius area for many years and was a sales person and installer for Sears in Princeton for 25 years. He was a member of Manlius Sportsman Club and the Princeton American Legion. Robert also enjoyed fishing, playing Bingo, spending with family and friends as well as spending 25 winters in Arizona. Robert is survived by two sons, Gary (Kathryn) Dabler of Highland, CA.; Dennis (Janice) Dabler of Princeton, IL.; five grandchildren, Michael (Becky) Dabler of Chesterton, IN., Gary (Diana) Wood of Huntington Beach, CA., Gregory (Paula) Wood of Dunkirk, MD., Glen (Michelle) Wood of Schwenksville, PA., and Karen (Peter) Demerick of Silverdale, WA. Also surviving are 11 great grandchildren and one great great grandchild. He is preceded in death by his parents and wife, Caroline. The services will be private. Online condolences may be left at norbergfh.com

The family of Robert Wayne Dabler created this Life Tributes page to make it easy to share your memories.

Send flowers to the Dabler family.