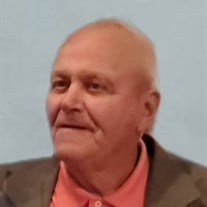 Walnut - Robert Joseph Hensel, 84, passed away on a Monday, December 6, 2021, at his home. Robert was born on November 9, 1937 in Princeton, IL to the late Verner and Lillian (Reynolds) Hensel. He was a graduate of Ohio High School, Class of 1955. He met and married the late Roberta Mae Wiggim on July 12, 1955, at the Trinity Evangelical Lutheran Church of Manlius, IL. She passed away July 12, 1989. Bob was a lifelong farmer. Throughout the years he had milking cows, raised cattle and for more than 60 years, he raised pigs. The grandchildren and great grandchildren all loved to go to Papa Bob's to see the baby pigs. He was also a Seed Corn Dealer for PAG and Cargill Seed. He measured grain bins for several years and also installed carpet for Eckberg's Carpet in Walnut. He also grilled pork chops at the Princeton Homestead Festival for over 30 years. He loved his family and friends and was always stopping in to visit and catch up with all his loved ones, never meeting a stranger and always willing to share his story. Bob was a member of the Sportsman Club in Manlius, IL., he was also a member of several Antique and Steam Engine Clubs, way too many to name. He served many different positions at the Limerick Cemetery including but not limited to President, Overseer and Treasurer. He was member of the Manlius Historical Society. He was also a very active member of his church, Trinity Evangelical Lutheran Church of Manlius. Surviving Bob are his five children, Bettie Jo May of Princeton, IL, Robert J. Hensel of San Diego, CA, Richard Hensel of San Diego, CA, William (Arlene) Hensel of Princeville and Ronda (Kurtis) Geldean of Walnut, IL,; six grandchildren, Jared Shepard of Denver, CO, Branden Hensel of Princeville, Amber (Austin) Taylor of Brimfield, Taran (Michael) Cobb of Valdosta, GA, Sadie (Jacob) Robinder of Tampico, and Ellie Geldean of Walnut; two step grandchildren, Eric (Christine) May of Shorewood, IL and Brad (Sue) May of Peru, IL.; seven great grandchildren, Madison, Makenzie, Marleigh and Maddex Leopold, Brantley Taylor, Clea and Brooks Cobb; four step great grandchild, Gracie, Eastin, Ambria and Camden May; two sisters-in-law, Janice (Rod) Attig of Dixon, IL and Nancy (Jerry) Levitt of Wellsville, NY; as well as numerous nieces, nephews and cousins. Preceding Robert in death are his parents, Verner and Lillian Hensel, his wife, Roberta (7/12/1989), one son in infancy, Johnny R. Hensel, two grandchildren, Angelia Shepard in infancy and Brett Shepard, one brother, Verner Eugene (1963) and one son-in-law, Danny May. In lieu of flowers, memorials may be directed to the Trinity Evangelical Lutheran church of Manlius, IL. The services for Robert will be private per Robert and the family's request. Online memorials and condolences may be directed to www.norbergfh.com Arrangements by Norberg Memorial Home. Inc. & Monuments.

Walnut - Robert Joseph Hensel, 84, passed away on a Monday, December 6, 2021, at his home. Robert was born on November 9, 1937 in Princeton, IL to the late Verner and Lillian (Reynolds) Hensel. He was a graduate of Ohio High School, Class... View Obituary & Service Information

The family of Robert Joseph Hensel created this Life Tributes page to make it easy to share your memories.

Walnut - Robert Joseph Hensel, 84, passed away on a Monday, December...

Send flowers to the Hensel family.