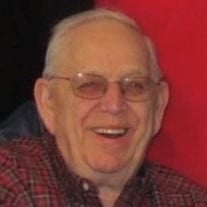 Bureau – Robert F. Jaskowiak, 92, of Bureau, IL passed away peacefully in his sleep at home on Wednesday, April 22, 2020. Robert was born in Chicago, IL, on April 26, 1927, to Anton and Irene (Mlodzikowski) Jaskowiak. He attended Princeton High School and graduated with the Class of 1945. While in high school, he volunteered for the Navy during World War II and served in the Pacific theater until the end of the war. He worked as a letter carrier for the United States Post Office before meeting and marrying his beloved Frances M. Jaskowiak, on August 27, 1953. Robert and Frances were married for 65 years. Prior to starting a family, they opened a small printing business, which he continued to operate after he retired from the Post Office until he was 88. He was a member of St. Francis Xavier Catholic Church and VFW, and was President of the Bureau Grade School Board for 40 years. Robert enjoyed spending time with his family, traveling, golf, and reading. He also enjoyed spectator sports (frequently coaxing referees and umpires to open their eyes) and was an avid Cubs, Bears, Notre Dame, and Illinois fan. He was a talented singer, often performing as a soloist in wedding ceremonies and leading the St. Francis Xavier choir. Robert was active in the community, donating printing for charitable causes, sponsoring the highly competitive Bob’s Print softball team in the 1970s, and playing for years in the Annual Jimmy D Charity Golf Tournament, where he was honorary captain of the winning 2019 team. He was a very devoted husband, father and grandfather. Robert is survived by his six children, Joseph (Susan) Jaskowiak, Margaret Jaskowiak, Thomas (Tina) Jaskowiak, Steven (Kathleen) Jaskowiak, Mary Diekemper and Anne (Gerald) Devert; eleven grandchildren, Paul (Jennifer) Jaskowiak, Mark Jaskowiak, Julia (Art) Singarajah, John Jaskowiak, Mary Kathryn (David) Cannon, Michael Jaskowiak, Daniel Jaskowiak, Mary (Daniel) Turbe’, Lisa Jaskowiak, Kelly Devert, Madeline Devert; and four great grandchildren, Jack Singarajah, Rory Singarajah, Lily Singarajah, and Jack Jaskowiak. He is preceded in death by his wife, Frances, and his parents Anton and Irene Jaskowiak; and two brothers Stanley Jaskowiak and Anthony Jaskowiak. Private graveside services will be held on Monday, April 27, 2020, officiated by Father Patrick DeMeulemeester. Interment to follow at Greenwood Cemetery, Bureau, IL. A memorial mass will be held at St. Patrick’s Catholic Church, Hennepin, IL, when the coronavirus pandemic eases. In lieu of flowers or food, memorials may be directed to the family for charitable distribution. Online condolences and memorials may be left at www.norbergfh.com Arrangements by Norberg Memorial Home, Inc.

The family of Robert F Jaskowiak created this Life Tributes page to make it easy to share your memories.

Send flowers to the Jaskowiak family.