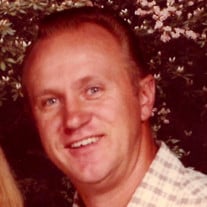 Robert "Bob" E. Miller 1942-2018 Robert "Bob" E. Miller, 75 of Dover, passed away on Thursday, February 15, 2018 at St. Francis Medical Center in Peoria. He was born on September 28, 1942 in Wyanet, IL to Scharswood and Naomi (Walters) Miller. He graduated from Tiskilwa High School. Bob married Jane Mason on April 8, 1982 in Dover. They renewed their vows on June 28, 1999 in Ottawa. Bob worked maintenance at Conco Inc. in Mendota and later retired from Rochelle Foods in Rochelle. He also worked as an EMT in Mendota, delivered parts for Princeton Electric and delivered meals for the Voluntary Action Center. He enjoyed watching the Chicago Bears, fishing, reading westerns, woodworking and walking the dogs at Friends of Strays. He is survived by his loving wife, Jane; four children, Debbie Nissen of Princeton, Rick (Jeanette) Miller of Odell, Paul Miller of Montana and Barbie (Matt) Dumney of Arizona; one sister, Eleanor Fisher of Dover; twelve grandchildren, fourteen great grandchildren and his special four-legged friends, Lil, Rudy, Nicky, Vicky and Lilly. He is preceded in death by his parents and two brother in laws, Dan Fisher and Bob Sticken. Cremation has been accorded. Graveside services will take place at a later date. In lieu of flowers, memorials may be directed to Friends of Strays. Norberg Memorial Home is assisting the family. Online condolences may be left at www.norbergfh.com

The family of Robert E. Miller created this Life Tributes page to make it easy to share your memories.