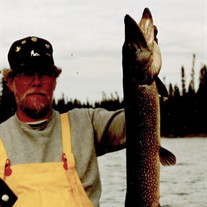 Princeton – Robert Lawrence Miller “Bob” 74 of Princeton, passed away on Friday, December 13, 2019 at OSF St. Francis Medical Center, Peoria, IL surrounded by his loved ones. Bob was born in St. Louis, Missouri on June 2, 1945 to the late Lawrence and Margaret (Burger) Miller. He attended school in Rockford, IL until he settled into his permanent position as a tool and die maker, a lost art now a days. He worked for Schneider’s, Olympic Welding and retired from Mennie Machine Shop in Granville, IL, in 2007. He spent a short time as a Firefighter in Hayward, WI. He also helped build White Manor Resort in Wisconsin and in his lifetime built more then 20 houses from the ground up with his father. He married Cecelia Karpinski on August 25, 1974 and they had two children, Chad and Chris. Even though their marriage ended, they still maintained a friendship and love for one another. He loved fishing, anywhere, anytime. He was always ready for the next big catch. He loved taking his sons to Canada to fish and when they were unable to make it to Canada it was Wisconsin, the canals, ponds, lakes or the Illinois River. He enjoyed golfing and anything outdoors. He loved camping at the 40 & 8 and spending time with family and friends. He was quite the wood worker and could build anything. He enjoyed riding motorcycles; a Honda Goldwing was always his bike of choice. In his later years you could find him anywhere his son Chad was, whether it was Tanks Pet Store or Wyaton Hills golf course. As his health began to decline, he moved in with his son Chad and Chads wife Jackie. Bob is survived by his loving brother Bill (Gaye) Miller of Scottsdale, AZ; two sons, Chad (Jackie) Miller of Princeton, IL and Chris (Adrienne) Miller of Wright, WY; three grandchildren, Ashlyn, Chloe and Hunter. He was preceded in death by his parents, Lawrence and Margaret Miller and his best friend Louis Galassi. In lieu of flowers, memorials may be directed to the family. A visitation will be held for Bob on Thursday, December 19, 2019 from 10:00 a.m. to 12:00 p.m. at Norberg Memorial Home, Inc. & Monuments. Services for Bob will be at Norberg Memorial Home, Inc. & Monuments on Thursday, December 19, 2019 at 12:00 p.m., officiated by Pastor Brian Moore. Cremation rites accorded. Per the families request, please dress in casual attire, it's what Bob would have wanted. Arrangements by Norberg Memorial Home, Inc. & Monuments Online condolences may be left at www.norbergfh.com

The family of Robert Lawrence Miller created this Life Tributes page to make it easy to share your memories.