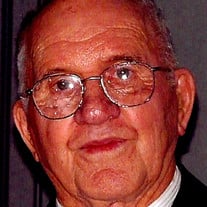 Robert Piper 1920 - 2018 PRINCETON - Robert Rex “Bob” Piper, 97, lifelong resident of Bureau County, passed away at his home in Princeton, Illinois on Monday, January 15, 2018 with family by his side. Bob was born to Henry E. and Madge (Heaton) Olson on September 8, 1920 in Greenville Township. He lived his early childhood in New Bedford, Wyanet, Sterling, and Princeton. In 1929, his mother married Ansel Piper and the family moved to Ansel’s farm north of 5 Points in Berlin Township. Bob graduated from Princeton High School in 1940, where he lettered in both football and track. He also enjoyed playing church softball for many years. It was in 1944 that he legally changed his name from Olson to Piper. Bob married Angela Alberta “Bert” Maupin on September 19, 1945 in the St. Louis Catholic Church Parsonage. Bob and Bert began their life together on the Piper family farm where Bob grew up and they lived there for 42 of their 67 years of marriage. He worked hard on the farm and was maybe the first to rig up tandem tractors, plows and harrows in Bureau County. Bob retired from farming in 1987 when he and Bert moved to Princeton to enjoy their retirement years. Bob served on the Durham School Board of Education and later on the LaMoille High School Board of Education from 1963 until 1971. He was president of the LaMoille School Board from 1965 until 1971. During this time, Bob worked earnestly with other board members to successfully create a LaMoille Unit School District. Bob was a wonderful husband, father and grandfather who deeply loved his family. He will be missed and remembered by his loving children, grandchildren, great grandchildren, extended family and friends. He is survived by his son, Lt. Col. Rex Piper of Princeton, three daughters, Renee Stuepfert of La Moille, Rita (Bruce) Placek of Princeton and Robyn Piper (Jay Jordan) of Del Mar, California; his grandchildren, Eric (Emily), Mark (Marcia), Kyle and Jay Piper, Scott (Tricia) Stuepfert, Michael Stuepfert, Brian (Kendra) Placek, Justin Placek, Brandon (Jessica) Placek, and Taylor Jordan, George “Mick” Jordan and Cassandra Jordan. He is also survived by twelve great grandchildren, sister-in-law, Laura Maupin of Granville, NY and many nieces and nephews. He was preceded in death by his beloved wife, Bert, his parents, his sister Donna Hunsberger Borop, his infant brother, Zane Heaton Olson, his son-in-law, Gordon Stuepfert and his daughter-in-law, Deborah Piper. Bob was a great-great-grandson of Rees and Sarah Heaton, who settled in Bureau County in 1835. Services will be held at the Norberg Memorial Home in Princeton. Visitation will be from 4 - 6 pm on Monday, January 22, 2018 and the funeral will be held at 10:30 am on Tuesday, January 23, 2018. Pastor Brian Gilbert and Father Daniel Gifford will officiate. Burial will follow in Elm Lawn Memorial Park in Princeton. Memorials may be directed to VITAS Healthcare, LaSalle and Princeton Fire Department and EMS. Online condolences may be left at www.norbergfh.com

The family of Robert Rex Piper created this Life Tributes page to make it easy to share your memories.

Send flowers to the Piper family.