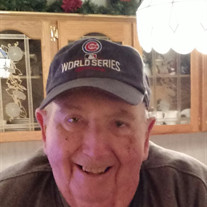 Robert K. Yepsen 1935-2017 Funeral service for Robert K. Yepsen, age 81 of Princeton, will be Thursday, May 04, 2017 at 11:00 AM at Christ Community Church in Princeton. Pastor Jon Panner will officiate. Burial will follow in the Oakland Cemetery on May 04, 2017. The family will receive friends on Wednesday, May 03, 2017 from 5:00 PM to 7:00 PM at the Norberg Memorial Home in Princeton. Robert K. Yepsen passed away on Sunday, Apr 30, 2017 at Perry Memorial Hospital. He was born on Nov 08, 1935 in Princeton, IL to Robert and Dorothy (Knigge) Yepsen. He graduated from Princeton High School in 1954. He married his high school sweetheart, Wava Burrows on June 20, 1954 in Princeton. He worked as an operating engineer for Local 150 and also attended Barber College in Moline, IL. He owned and operated Bobs Barber Shop in Princeton for many years. Robert was an avid Cubs fan since 1950. He loved to coach his boys in baseball and was also a Cub Master, he was also on the Wyanet school board for many years. He served as a youth leader for the First Baptist Church and was one of the first Elders of Christ Community Church. Robert was a devoted husband for 62 years and father and enjoyed fishing with his grandchildren. He is survived by his wife Wava of 62 years; four children, Michael (Barbara) Yepsen, Deborah (Nicholas) Thomas, Keith (Lynnette) Yepsen and Alan (Michelle) Yepsen; seven grandchildren, Christina, John, Joshua, Nathan, Jesse, Bryton and Shelby; and one sister, Marilyn (Jerrell) Long. He was preceded in death by his parents and two grandsons, Scott and Tanner. In Lieu of flowers Memorials may be directed to the American Cancer Society or Christ Community Church. Online condolences may be left at www.norbergfh.com

Robert K. Yepsen 1935-2017 Funeral service for Robert K. Yepsen, age 81 of Princeton, will be Thursday, May 04, 2017 at 11:00 AM at Christ Community Church in Princeton. Pastor Jon Panner will officiate. Burial will follow in the Oakland... View Obituary & Service Information

The family of Robert K. Yepsen created this Life Tributes page to make it easy to share your memories.

Send flowers to the Yepsen family.