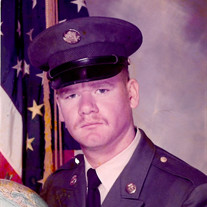 Tiskilwa, IL – Roger L. Balensiefen, 64, from Tiskilwa, IL, passed away at his home on Monday, October 22, 2018 surrounded by loved ones. Roger was born on November 15, 1953 to Henry and Marilyn (Long) Balensiefen in Princeton, IL. He was a graduate of Bradford High School Class of 1973. He went into the Army shortly after graduation and served our country from 1974 to 1977, receiving the Defense Service Medal and a medal for Marksmanship. He started farming and enjoyed doing that for many years before becoming an over the road truck driver until retirement in 2012. He enjoyed fishing in his spare time and watching a good movie and spending time with his beloved Jan. Roger is survived by his significant other, Jan McCarter – Princeton, IL, one sister; Pat (Alan) Read – Tiskilwa, IL, two brothers; Stanley (Debbie) Balensiefen – Tiskilwa, IL, Bradley (Sherry) Balensiefen – Tiskilwa, IL, children, grandchildren, aunts, uncles, nephews, nieces and cousins. He is preceded in death by his grandparents and parents. Visitation will be held on Monday, October 29, 2018, from 10:00 a.m. to 12:00 p.m. at Norberg Memorial Home, Princeton, IL. Services will be held on Monday, October 29, 2018 starting at 12:00 p.m. officiated by Deacon John Murphy at Norberg Memorial Home, Princeton, IL. A grave side service will follow at Calvary Cemetery, Henry, IL. In lieu of flowers, memorials may be directed to the Tiskilwa Ambulance and Rescue. Online condolences may be left at www.norbergfh.com Arrangements made by Norberg Memorial Home, Inc. & Monuments, Princeton, IL.

The family of Roger L Balensiefen created this Life Tributes page to make it easy to share your memories.

Send flowers to the Balensiefen family.