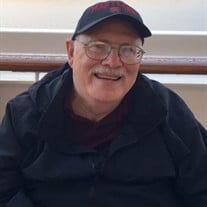 Roger 'Gus' Gustafson Roger "Gus" William Gustafson, 70, passed away Nov. 5, 2016, surrounded by his family at Perry Memorial Hospital where he received outstanding, compassionate care. Roger was born June 12, 1946, in Rochester, N.Y., to Everett and Janet Gustafson. After graduating from Princeton High School in 1964, Roger attended Northern University. He entered the U.S Air Force in 1968 where he served for four years as an information analyst at the National Security Agency in Fort Meade, Md. He graduated with a bachelor's degree in business administration from the University of Maryland in 1973. He married Linda Chaney on April 15, 1972, in Laurel, Md. She survives along with their two Ragdoll cats, Mr. Carson and Mr. Mosely. Also surviving are Roger's brother Allen (Virginia) Gustafson and their daughters, Mary and Katie; his uncle Irvin Gustafson; brothers-in-law Jim (Elaine) Chaney and their son, Steven (Caroline) Chaney; Louis (Janet) Chaney and their children, Kathryn and Christopher Chaney; and Thomas Chaney. Roger was preceded in death by his parents, Everett and Janet Gustafson. Roger was co-owner of Gustafson True-Value Hardware and later Gustafson Ace Hardware for over 30 years. He was active in the Princeton community and was the president of the Bureau County Historical Society Board, a member of Princeton Rotary Club and Princeton Public Library Board. He recently participated in the Princeton Main Street Revitalization Community Vision Workshops to plan for the future development of the Princeton community. He served on the Bureau County Homestead Festival Committee, the original Main Street Committee, the Princeton Schools Foundation, and as President of the Princeton Optimist Club and as a Princeton Chamber Ambassador. He was a member of Bureau Valley Country Club and Union League Club of Chicago. He and his wife, Linda, traveled the world, visiting Antarctica, Asia, Australia, New Zealand, South America, Norway, the Arctic Circle, the Caribbean, the Baltic, the Mediterranean, throughout Europe and the United States. Highlights from his travels included being on top of the Great Wall of China and the Acropolis in Athens as well as seeing the icebergs of Antarctica and the fjords of both Norway and New Zealand. He was a lifelong learner and was interested in many diverse areas including reading, gardening, gourmet cooking, wines, nature, photography, history, science, art, music, theater and cultures of the world. First and foremost, he loved people and enjoyed telling jokes, listening to the stories of others and sharing the many joys of just being with people. He was an advocate for accessibility, presented programs on accessible travel and helped many people to overcome challenges. Roger loved being with his family, especially the annual summer beach vacations with the Chaney family. A visitation will be from 4-7 p.m. Tuesday, November 8 at the Norberg Memorial Home, Princeton. Pastor Scott Schmidt will officiate at a memorial service at 10 a.m. Wednesday, November 9 at St. Matthews Lutheran Church. Following interment at Oakland Cemetery, a luncheon will be held at St. Matthews Lutheran Church. Memorials may be directed to Perry Memorial Hospital, Princeton Public Library and the Bureau County Historical Society Matson Renovation Project. Norberg Memorial home is assisting the family, online condolences and remembrances may be shared at Norbergfh.com.

The family of Roger William Gustafson created this Life Tributes page to make it easy to share your memories.

Send flowers to the Gustafson family.