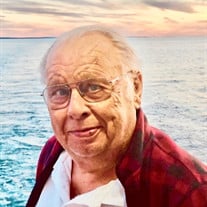 Princeton - Roger August Post, 83, of Princeton, IL, passed away on Wednesday, November 17, 2021, at St. Margaret's Hospital in Spring Valley, IL. Roger was born in Chicago, IL, on July 12, 1938, to the late Harold and Marcelle (Boehmer) Post. He graduated with a business degree from St. Ambrose College in 1961. He joined the US Army, and was honorably discharged in September of 1963. While stationed in Kentucky, he met the love of his life, Jacqueline Spalding. They married in Springfield, Kentucky on October 12, 1963. After starting his career in business with Dunn & Bradstreet in Chicago, Roger moved to Princeton in 1971, as the regional manager for the Hen House Restaurant. He eventually bought into the Fawn Vending Machine Company, which grew into the Fawn Hometown Vending Company. For many years, Roger was active in the Princeton Rotary Club, the Princeton Chamber of Commerce, and the St. Louis Parish, while his children were students there. After retiring, he drove a school bus for Princeton Elementary School and enjoyed engaging with the parents and children. Roger had a mind for business and loved to share his knowledge with everyone he encountered. In his free time, Roger enjoyed golfing, bowling, fishing, eating at the Coffee Cup, and playing cards with his children and grandchildren. He was always ready for a road trip, and took many wonderful vacations with his family. He loved wintering in Florida and soaking up as much sun as possible. He was a huge fan of the Chicago Cubs and Bears, and loved going to games with his children. He was a big supporter of several local organizations, including the Second Story Teen Center and Freedom House. He is survived by a sister, Joyce (Lee) Colbert; his five biological children, Steven (Ginell) Post, Laura (Blake) Stanton, Julie (Doug) Platz, Sheila (Joe) Adamo and Tony (Angela) Post; and one adopted daughter Laura C. Post. Additionally, he was survived by fifteen grandchildren: Kyle Decker, Tiffany Platz, Andrew Platz, Alex Platz, Corey (Chelsea) Post, Jackie Post, Sophia Post, Joe Adamo, Angela Adamo, Vinny Adamo, Sarafina Adamo, Braden Post, Addison Post, Gyonna Kaufman, and Harper Kaufman. Roger was preceded in death by his parents, Harold and Marcelle Post; his wife of 28 years, Jacqueline Post (1991); one sister, Dolores "Cookie" Henry; and one grandson, Nicholas Decker. In lieu of flowers, memorials may be directed to Princeton Freedom House or Friend of Strays Animal Shelter. A visitation will be held on Saturday, November 20, 2021, at Norberg Memorial Home from 5:00 p.m. to 7:00 p.m. Services for Roger will be held on Sunday, November 21, 2021, at Norberg Memorial Home at 10:00 a.m. officiated by Pastor Laura Root-Tanner. Graveside services to follow at Oakland Cemetery in Princeton, IL. Military Rites accorded. Online memorials and condolences may be directed to www.norbergfh.com Arrangements by Norberg Memorial Home, Inc. & Monuments.

The family of Roger A Post created this Life Tributes page to make it easy to share your memories.