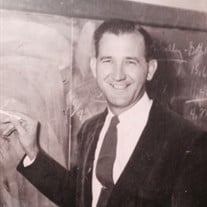 Princeton – Roger N. Swan, 95, of Princeton, IL, passed away peacefully at his home on Wednesday, June 12, 2019 surrounded by loved ones. Roger was born on February 7, 1924 in Keokuk, IA to Carl and Achsa (Hayes) Swan. He attended elementary school in Wyanet and junior high and high school in Princeton. He graduated in the Class of 1941. He received a Bachelor of Science in Mathematics and Education from Northern Illinois University in 1947 where he also played basketball. He furthered his education and received his Masters of Science in Education from Northern Illinois University in 1953. He also received his Masters of Science in Mathematics from the University of Wyoming in 1964. He married his sweetheart, Joanne Conley, on May 15, 1949 at the First United Methodist Church in Princeton, IL. They recently celebrated their 70th wedding anniversary. Joanne was Roger’s main care giver in the later stages of his life, a labor of love; but she wouldn’t have it any other way. He worked as a teacher and coach at Malden High School for one year, he worked as a teacher and coach at Malta High School for seven years, where he also served as school treasurer and vice chairman of the Community chest and a member of the Tuberculosis association of DeKalb County. He then began his career at Princeton High School where he started as teacher and coach, then Principal, and retired as the Princeton High School Superintendent in 1983. During the summer months when he wasn’t working as a teacher, he worked as a hail adjuster for State Farm. Roger was a member of the Elks Club, Rotary Club, Perry Memorial Hospital Board, Draft Board, as well as serving on several committees at the First United Methodist Church. He was a member of the Northern Illinois Athletic Hall of Fame and served at the Grand Marshall of the Princeton Homestead Festival. He is also the namesake of the Swan-Eickmeier scholarship along with Roger Eickmeier for the longtime Rotarians and leaders in the community. He was a life-long, avid Chicago Cubs fan, a member of the Truth Table coffee group, and an honorary member of the Turkey Buzzards. He enjoyed playing pitch, bowling, and horseshoes with friends. He enjoyed watching Jeopardy and Wheel of Fortune, and doing Crosswords and Sudoku. He was a forever fan of all Princeton High School activities. Wherever he went, he went out of his way to drive down Euclid Avenue to see his beloved PHS. He was drafted into the US Army in March 1943. His first day of combat was December 13, 1944, three days before the Battle of the Bulge started. He saw extensive action in the Battle of the Bulge. He earned his Purple Hearts because he had been wounded three times in the space of 45 days from late January to early March 1945. He earned a Bronze Star for meritorious service and for being wounded three times and refusing to be evacuated. His second Bronze Star was earned during the crossing of Remagen Bridge. This was the only bridge across the Rhine River that the Germans failed to blow up on their retreat, known as the Battle of Remagen. Roger was part of the force preventing the Germans from regrouping east of the Rhine and consolidating their positions. The battle was even made into a movie, The Bridge at Remagen in 1967. Roger was a true American Hero. Roger is survived by his loving wife of over 70 years, Joanne Swan; four children, Christy (Cal) Gramer of Princeton, IL., Tom (Becky Pace) Swan of Dekalb, IL., Tim (Connie) Swan of Westmont, IL., and Jennifer (Robert) Merth of Princeton, IL.; 12 grandchildren, six boys, Noah (Michelle) Grove, Ethan (Sarah Joynt) Grove, Andy (Brooke) Gramer, Nicholas (Amanda Hobson) Merth, Austin Swan and Conner Swan and six granddaughters, Tiffany (Kirk Schiebel) Grove, Carrie (Brook) Predeger, Caley (Chris) King, Chelsea (Charles Labozzetta) Merth, Kylie (Kyle Minden) Merth and Carsen Swan; thirteen great grandchildren, seven great grandsons, Matthew, Noah Jr., Jarred, Quillan, Mannix, Finn and Reid, and six great granddaughters, Kira, Lina, Kaitlyn, Kamera, Verity and Cassidy; one sister, Virginia Nelson; two sisters-in-law, Flory Swan and Marcia (Bob) Hudson; as well as many nieces, nephews and cousins. He is preceded in death by his parents; two brothers, Everett Swan and John Swan; one sister, Joanne Klingenberg; two brothers-in-law, Wilbur Nelson and Wilbur Klingenberg. A visitation for Roger will be held on Friday, June 14, 2019 at Norberg Memorial Home from 4:00 p.m. to 7:00 p.m. Services will be held on Saturday, June 15, 2019 at 1:00 p.m. at the First United Methodist Church of Princeton, IL., officiated by Reverend Brian Gilbert, followed by a graveside service at Oakland Cemetery to include military honors. In lieu of flowers memorials may be directed to Princeton High School or the First United Methodist Church. Arrangements by Norberg Memorial Home, Inc. Online condolences may be left at www.norbergfh.com

The family of Roger Neal Swan created this Life Tributes page to make it easy to share your memories.

Send flowers to the Swan family.